Typically calm colours have been abandoned in favour of bolder hues inside the Haeckels House day spa in Margate, England, designed by the brand's founder Dom Bridges.

The spa has been added to Haeckels, a seafront store that offers a range of skincare products inspired by thalassotherapy – a type of therapy that utilises ocean water and ingredients gathered from the shoreline.

The top two levels of the three-floor building have been overhauled to feature a handful of brightly-hued spa treatment rooms, joining the retail space which has been on the ground floor since 2012.

Its interior design was lead by the brand founder, Bridges, who wanted to avoid the restrained colour palette typically applied to spaces which encourage slow living – a lifestyle movement stemming from the 1980s that encourages stepping back from the chaos of day-to-day life.

"We will always abide by [slow living] philosophy in terms of production, but I felt it was important for us to break away from the expected aesthetic of the movement and into a celebration of colour and materials," Bridges explained to Dezeen.

"I wanted us to detach from the muted greys and off-whites; to me, they represent a kind of safe place for design by not making a statement."

Bridges asked for help from his friends at locally-based Reworks Studio to carry out structural changes to the building, which included stabilising the deteriorated roof and rearranging existing partitions to create a more open floor plan. 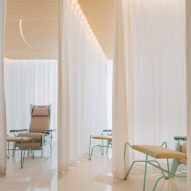 The second floor now plays host to a couple of treatment rooms, while the third floor accommodates a large bath where guests can submerge themselves in wild seaweed gathered from the adjacent beach.

"What was once a very dark, uninspiring space suddenly doubled in size and became tranquil with a calming flow," Bridges said.

Walls have been painted a mix of teal-blue and coral orange, intended as a subtle visual nod to the nearby ocean waters. As well as pastel-coloured soft furnishings and metallic lights, each room has then been dressed with items crafted by emerging designers.

This includes a vase by Charlotte Kidger, which comprises of coloured layers of industrial waste, and a woven abstract artwork by Jo Elbourne, which is meant to reflect the view of the landscape that can be seen through the spa's front windows.

These pieces will be rotated regularly, allowing Haeckels House to serve as a small-scale gallery that Bridges says will "celebrate new materials and design in a very understated way".

Haeckles House isn't the only wellness space to boast a bold colour scheme – back in 2017, architecture studio Space Popular created a spa in Bangkok that features turquoise walls, chairs, and massage tables.

Photography is by Jo Bridges unless stated otherwise.