London studio Barber and Osgerby has worked with Knoll on a collection of tables with light-fast and waterproof enamel tops that mean they can be used both indoors and outdoors.

The studio has exploited the potential of their chosen material by creating tables with a smooth, glossy surface that is impervious to water, won't fade in direct sunlight and is naturally antibacterial.

These qualities make enamel an unusually good material for versatile furniture that won't come to any harm outdoors.

"Materials that are typically good for outdoor furniture are not necessarily good for indoor and vice versa, but enamel is an exception," said studio co-founder Edward Barber.

The tables come in a round version as well as a longer oblong style that can be produced to various lengths, in four rich colours, grey/green, a deep navy blue, dark grey and aubergine.

The enamel finish adds an intensity and depth to the colour rarely found in a painted surface.

"The colour has a depth to it unlike a paint finish which is very flat," Barber told Dezeen. "When we were experimenting with lots of colours, they all came out nicely. It has a natural appeal."

Keen to try new materials, Barber & Osgerby approached Knoll with the idea of working with enamel, a material they had not previously experimented with but had been interested in for a long time.

"Enamelling has a really strong materiality and tactility that cannot be replicated in other finishes," explained the studio. "The colours you can achieve through this process have a real depth and vibrancy and the finish is also extremely durable, perfect for a table top."

The form of the tables was a direct response to the properties of the material, in particular the need to prevent the enamel chipping. 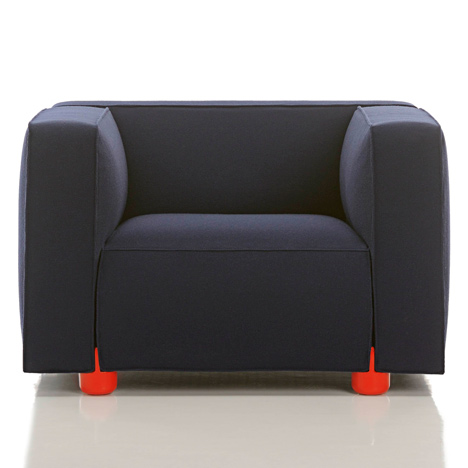 "To avoid chips you have generous curved surfaces, so no sharp edges and no corners. That was really the starting point and what informed the design," explained Barber.

"They've got a very generous radius on top, and the legs are quite chunky, so what's interesting is that the material actually informed the shape of the table which is unusual, as with metal or wood you can make whatever shape you want," he continued.

In order to achieve the smooth sheen and depth of colour, a moulded steel shape is finished using a process that fires a thick layer of fine enamel powder at an extremely high temperature.

"The design process was an exercise in purity and simplicity for the studio and the result is an exceptionally durable collection that is both contemporary and classic," said Knoll.

Barber & Osgerby have previously designed a collection of sofas for Knoll that launched at Milan Design Week in 2013, as well as a lounge chair with a distinctive square back for the brand that they showed at Clerkenwell Design Week two years later.

The studio has work for Vitra, Flos, Dedon and many other high-profile brands under its belt. Barber & Osgerby also designed the Olympic torch for the London 2012 Olympic Games.

Last year, founders Edward Barber and Jay Osgerby sold a majority stake in two companies that they started, the architecture and interior design office Universal Design Studio and industrial design company Map. They remain as directors of both companies.