London industrial designer Tej Chauhan's latest projects include a car tyre imprinted with the Nike swoosh and a smart speaker phone that links up with Amazon Alexa.

Chauhan created the Nike tyre in response to a brief from luxury car manufacturer Lexus and advertising agency TeamOne. It asked him to put an artistic spin on a set of tyres for Lexus' first crossover vehicle, the 2019 UX.

Called Sole of the UX, the result was formed as a collaboration between Chauhan, Lexus, and Los Angeles streetwear and athleisure designer John Elliot.

Envisioning them as the "footwear" of the car, Chauhan took cues for the tyres from Elliot's NikeLab Air Force 1 sneaker, a white on white, high platform sneaker that features Nike's signature 'swoosh' logo across the sides.

"But as an art project it did also carry serious engineering demands, having to carry the full weight of the new Lexus UX."

The outsole of the Air Force 1 sneaker features a ribbed circular pattern that look like wheels, a design Chauhan loosely applied to the tyre's 3D-printed design.

The tyre's tread designs include rubber imprints of the Nike logo, and swirls and waves in multiple textures and patterns. The tyre's metal air valve is intended to evoke the metal lace tip that Elliot designed for the sneaker. Also featured are the Lexus logo in the centre of the wheel, and metallic black spokes.

They first created the internal structure that could support the weight of the Lexus UX, using a CNC (Computer numerical control) machine. Exterior elements were then formed using a mix of 3D printing and hand craft, and pieced together over the top.

The Deuce is a handheld device that combines SGW's new landline technology and Amazon's Alexa voice command system, while also acting as an audio streaming speaker. Chauhan describes the two-in-one product, which resembles a large phone, as a "new archetype".

Other home tech products like the standalone Google Home and Amazon Echo are currently not able to make calls, nor are able to be picked up freely.

Deuce's sleek front is wrapped in an acoustic fabric for comfortable use on the ear. Its ergonomically curved body comes in a matte black or white finish, and features only four buttons on its side. 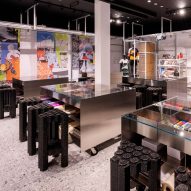 "Like all of our products, Deuce has been designed to invite an interaction," said Chauhan in a project description. "It's an example of our emotive industrial design approach, using simple visual gesture to make a connection."

Deuce will be available for purchase starting in October.

Chauhan, who has previously designed products for Nokia, established his practice Chauhan Studio in London in 2005. His work ranges from mass-produced consumer technology to modern, futuristic homeware.