Architects are not natural disruptors, says Amanda Baillieu, but they are slowly learning how to invest their time and money on innovating their businesses.

For years I have been calling for architects to behave more like startups, and it looks like the idea is finally catching on.

Arriving for a meeting at the RIBA recently, I was surprised to find it full of young people. And they weren't buying magazines or clutching cappuccinos from the cafe, they were working away at desks. It was the RIBA Incubator, a group of 26 desks available for start-up practices.

As co-creative director of this year's Guerrilla Tactics, a conference aimed at small practices, I felt a bit foolish for having missed this initiative.

While architects hot-desking at the RIBA doesn't exactly herald a revolution, it's part of a shift by recently formed architecture practices learning lessons from the start-up culture of the tech industry.

Tom Howard, of architecture studio Millar Howard Workshop told me: "Having the flexibility to shift direction is invaluable". First, because of the current economic climate, and second, because new technologies are poised to transform construction – one of the least digitalised industries and possibly the worst for cost and time overruns.

For the moment it's housing that architects like Howard are focusing on – no surprise – and in particular the burgeoning custom-build market. He is joined by Studio Bark, whose flat-pack kit house recently debuted at the Grand Designs show in London. Like other architects developing affordable self-build solutions, the practice is tapping into a growing market of young would-be homeowners tired of the stale, poor quality product offered by conventional housebuilders.

Millar Howard Workshop has launched a sister company, Lived In, offering a service that cuts out the housebuilder altogether by helping landowners prepare sites for sale. Others, like Carl Turner, are designing, building and managing their own developments or looking for sites to develop themselves.

The poster child for many of them is WikiHouse, a digitally manufactured building system, founded by Architecture 00 members Alistair Parvin and Nick Lerodiaconou in 2011. The project grew out of a realisation that the current housing model was outdated and had led to poor quality housing.

Take up of the WikiHouse has been slow, partly due to financial and legal obstacles. Yet it is likely that, in the future, open-source architectural technologies will be integrated into some construction projects, and might even play a role in alleviating the UK's current housing crisis.

As Parvin points out, "the only people who will always build the best, most sustainable homes are us".

By diversifying and offering new products and services, practices are changing the role of the architect

Patience is paramount, as Chris Romer-Lee knows only too well. His office Studio Octopi has spent six years trying to find backers for Thames Baths after raising more than £125,000 on Kickstarter, the funding platform for creative projects.

His resolve finally seems to be paying off with a commission for a floating swimming pool in east London that this time looks like it might just be built. 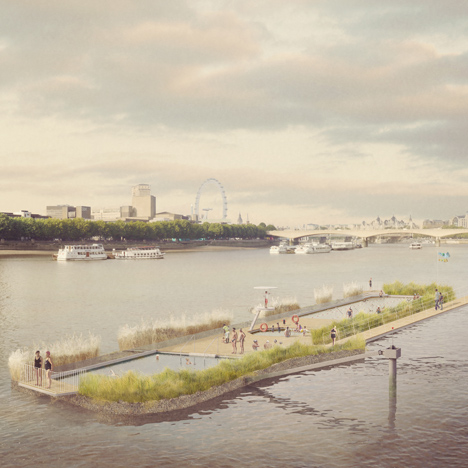 By diversifying and offering new products and services, practices like Romer-Lee's are not simply future proofing their business, they are changing the role of the architect and arguably peoples' relationship with the built environment.

But this comes at a cost.

Architects are not natural disruptors. Their training, followed by working for a practice and, if they can, setting up on their own or with friends, is a familiar but gruelling pattern that leaves them with little time or energy for anything else apart from the hard slog of getting their designs built.

They are also vulnerable when there's a downturn or recession. The brutal fallout from the crash of 2007 and 2008 is still very present in architecture. It has led to established practices being fearful and less willing to experiment, but for a younger generation it has made them acutely aware of the importance of being nimble and open to new opportunities.

It is not simply the rapid advance of technology or the fear of the next recession that is pushing architects in new directions. There is a feeling perhaps that architects need to find a new sense of purpose, now so few of them are employed to design hospitals, civic centres and universities. Coming up with their own solutions to the big challenges of today, whether its low-cost housing or ways to recycle empty shops, seems more satisfying and socially useful than squeezing another hundred units onto a site that will then be sold to overseas investors.

But to succeed in this new environment, architects need different skills to the ones taught at architecture school.

First, they have to be willing to operate more along the lines of a start-up, investing time and money in innovation with a focus on results and outcomes, not merely accolades and awards, and they need to learn how to use data to better understand people and places.

Second, they need to become better at collaboration, not with each other but with professions not typically associated with architecture, particularly technology but also and law and engineering.

Finally, they need to be slicker at business and communications in order to sell their ideas and to listen to feedback. This is why I started the Architect Pitch. Fast-paced and challenging, seven architects have just three minutes to give a synopsis of their practice and respond to a brief set by the client.

There are some aspects of running a small practice and a start-up that are similar; the intense stresses are common to both, so too is dealing with failure. But most importantly, both take a long time to build anything of value.

To successfully launch a product or idea takes huge guts and resilience – something that architects may want to ponder. But the rewards are great. They will not only be more in charge of their destinies, they will also be better placed to create a positive impact on the world.

Amanda Baillieu is the founder of architecture platform Archiboo, which runs the Architect Pitch, the Archiboo Web Awards and other events and talks. She is the former editor of UK architecture title Building Design. The next Architect Pitch will be on 27 June as part of the London Festival of Architecture.
Read more: