Design brand Menu has teamed up with architecture studio Norm Architects on The Audo, a hotel in Copenhagen where cosy, earth-toned guest suites double up as show spaces for new furniture and homeware.

The Audo encompasses Menu's headquarters, along with 10 guest suites that are all dressed with the brand's range of furniture, lighting and home accessories.

The Danish brand said the building highlights the "multidisciplinary, unifying nature of design".

"We wanted Menu to take a new approach to running a design business through openness, knowledge-sharing and collaboration," explained Joachim Hansen, director of Menu.

"By showing our collection in different contexts within hospitality we will make the collection become more alive," he told Dezeen.

The hotel occupies a 1918 building in Nordhavn – an industrial part of Copenhagen that's home to the city's port and cruise docks, but just a short distance from the trendy neighbourhood of Østerbro, which is populated by cafes and shops.

Its name is an acronym of the Latin phrase ab uno disce omnes – which translates as "from one, learn all" – and a nod to the hotel's multifunctional spaces.

"At the turn of the former century we were coming out of a period of beautiful neo-classicist architecture in Copenhagen, entering the early dawn of modernism," said Jonas Bjerre-Poulsen, co-founder of Norm Architects.

"The concept of The Audo is a hybrid, so was the original building. On the outside it has historical references, but on the inside the building is a rational, industrial concrete structure that allowed us to transform it rather freely."

Nearly all of the pre-existing partition walls have been knocked through to form a huge, open-plan ground level with concrete tile floors and perforated black metal ceilings. Dotted throughout are contrastingly tactile white boucle sofas, veiny marble coffee tables and chocolate-coloured velvet armchairs. 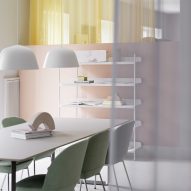 Adjacently lies the hotel store, which will offer a curated selection of products from other premium design brands. Here there is also a living room-style area dressed with an olive-green corner sofa, leafy print ottomans and one of Menu's Knitting Chairs, where guests can sit and relax throughout the day.

At this level is also a small cafe and restaurant.

An "amphitheatrical" staircase leads to the Menu offices and the communal workspace, which are closed off by black-framed panels of glazing. Guests can then take a lift up to their rooms, which are tucked away in the building's former attic underneath the original timber ceiling beams.

Designed to be richer in tone, the rooms feature terracotta plaster walls and Dinesen oak floorboards, as well as oat-coloured bed throws and rugs.

"On the ground floor, the house is symbolically transparent in the sense that the materials chosen for these spaces are raw and industrial, reflecting the spirit of the site – genius loci," added Bjerre-Poulsen.

"The further you move up in the house, the more intimate and warm the selection of materials become, the rooms invoke a sense of calm and serenity."

The Audo was unveiled to the public during 3 Days of Design, which annually takes place in Copenhagen to showcase the best of Danish design.

This event this year also saw Muuto reveal their new pastel-toned headquarters and Hay launch a new collection of homeware inside an 18th-century palace.