Beauty brand Glossier has teamed up with landscape designer Studio Lily Kwong to create a pop-up shop in Seattle that is filled with plant-covered mounds and splashes of pink and purple.

The design was conceived by Glossier's in-house team in collaboration with landscape designer Lily Kwong, who runs an eponymous Brooklyn studio. The team drew inspiration from the area's natural topography, including Mount Rainier and a popular neighbourhood park.

"After talking to people in the area and doing some on-the-ground research, we were really inspired by everyone's love for nature and how it seemed to be a unifying theme within the community," said Kendall Latham, Glossier's senior environmental designer.

"With Glossier Seattle, we wanted to capture the mood of the surrounding landscape and represent the juxtaposition of nature and technology in the city."

Visitors step into a bright space filled with plant-covered mounds of varying sizes. Live moss, Mexican feather grass and flowering shrubs are among the array of species used to adorn the hills, which were constructed using wooden ribs and wire mesh. Many of the plants are indigenous to the region, and all of the vegetation was locally sourced.

"Studio Lily Kwong worked with horticulturists and plant experts to make sure we incorporated grow lights and implemented a maintenance plan to properly care for the plants," the studio said. 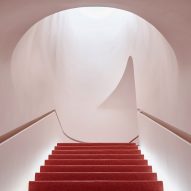 White display pedestals are positioned throughout the shop. Designed to be highly adaptable and scalable, the rectangular wooden blocks are topped with Corian surfaces. The company is able to reuse the stands in all of its pop-up stores owing to their flexibility.

Walls are painted a stark white, which contrasts with the verdant hills and raw pine flooring. The team incorporated large-format imagery that is rendered in tones of pink and purple, which draws upon Glossier's signature colour palette. The space also features wall-mounted mirrors lined with thin LED strips.

All of the company's beauty products, from makeup to lotions and serums, are available to test and purchase. Customers can also buy a limited-edition water bottle for $15 (£12), with a portion of the sales going to a local homeless shelter.

Also unique to the Seattle shop are reusable tote bags and "plantable" postcards, with wildflower seeds embedded in the paper.

"Glossier Seattle, like all of our offline spaces, is designed to be a pinnacle of engagement for the community we've cultivated online, and an immersive embodiment of Glossier in real life," the team said in a project description.

The Seattle shop, which is open through 7 July, comes on the heels of Glossier's pop-up shop in Miami, which featured a design influenced by the city's art deco architecture. Last year, Glossier hosted pop-up stores in San Francisco and Chicago.

Launched in 2014 as an online company, Glossier opened a showroom two years later in its New York headquarters designed by Rafael de Cardenas. Last fall, it unveiled a three-storey flagship store in Soho designed by Gachot Studios and PRO. It also has a bricks-and-mortar space in Los Angeles.

Photography is by Glossier.