Balconies fan out like leaves from the mixed-use L'Arbre Blanc tower, which Sou Fujimoto has completed in Montpellier with Nicolas Laisné, Dimitri Roussel and OXO Architectes.

Modelled on the shape of a tree, the curved 17-storey building contains 113 apartments with cantilevering balconies, alongside publicly accessible facilities on the ground floor and rooftop.

This layout was designed by Fujimoto, Laisné, Roussel and OXO Architectes to "reinvent the tower block".

According to the studios the shape facilitates interaction and encourages residents to embrace the outdoors – nodding to Montpellier's tradition of outdoor living.

"To reinvent the tower block, by designing it on a human scale, we wanted to give everyone the chance to take ownership of it. We created public spaces at the top and bottom of L'Arbre Blanc," explained Fujimoto.

"The large number of balconies and pergolas really do promote outdoor living and enable a new type of relationship between residents."

L'Arbre Blanc, which translates as White Tree, was the winning design of Montpellier city council's Folie Richter competition in 2013 that asked for a "modern folly" to "enrich the city's architectural heritage".

Fujimoto, Laisné, Roussel and OXO Architectes chose to collaborate on the design in recognition of their shared belief that architecture should evoke natural forms. 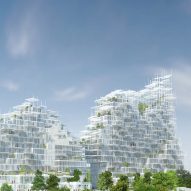 "Vertical village" by Sou Fujimoto, Nicolas Laisné and Dimitri Roussel to be built in Paris

"What we have in common is that nature inspires us, but we translate that very differently into our work. So we thought there would be great value in comparing our takes on this competition," explained OXO Architectes founder Manal Rachdi.

"The concept was so finely-honed that the final look of L'Arbre Blanc is not dissimilar to the first models, in terms of its form in particular but also its large outdoor spaces, an idea on which we rapidly agreed after telling Sou how the people of Montpellier lived," added Laisné.

The 113 apartments in the L'Arbre Blanc tower each face a different direction, and all have their own balconies.

Some of the balconies cantilever to over seven metres, and the duplex flats feature two that are connected by stairs. Intended for use as external living space, these encourage residents on different floors to interact.

"These exceptional outside spaces are fully-fledged living rooms which are connected to the dwellings in such a way as to allow residents to live inside and outside," said the studios.

On the ground floor of L'Arbre Blanc, there is a public art gallery lined with glass walls that opens out to a newly extended park along the Lez River.

Meanwhile, at the top of the tower a rooftop bar with a panoramic garden allows the public to enjoy views of the city, alongside a more private common area for residents.

Fujimoto is a Japanese architect and founder of Sou Fujimoto Architects, established in 2000. He describes L'Arbre Blanc as a "springboard for [his] work in France".

Its completion will be followed by the construction of  a tower with wavy canopies and verdant balconies in Nice, alongside a "vertical village" in Paris that the studio also designed in collaboration with Nicolas Laisné and Dimitri Roussel.