The campus marks the latest outpost of Mexican business school Escuela Bancaria y Comercial (EBC). The institution, whose name translates as Banking and Commercial school, was established in Mexico City in 1929, and has since expanded across the country.

The EBC Aguascalientes building comprises a series of concrete volumes that are arranged around a large planted courtyard. The team chose this inward-facing campus arrangement because the future use of surrounding lots is unknown.

The architects have enclosed the lush garden with covered areas that are intended to create spaces for casual encounters, in replace of classrooms.

"The central concept supports the idea that the most important space on campus is the space provided for the coexistence and natural interaction of the users," said the studio in a project description.

"This space is the meeting space, understood as the vacuum resulting from the most logical, practical, functional and flexible accommodation of the traditional parts that make up the campus." 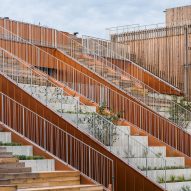 EBC Aguascalientes' concrete construction remains a key feature of the campus, with features including the exposed waffle roof and tall concrete pillars.

The arcade flanks the open central space and leads into the classrooms, meeting rooms, and other educational functions within the building.

Sections of glass blocks puncture these walls allowing natural light to come in while maintaining the privacy of those inside. Other details include red-painted accents such as metal guardrails and doors, and greenery that grows up the walls.

The campus's main area is a one-storey building known as the Learning Center, which is flanked by gardens on either side.

"The Learning Center is the heart of the campus and it is located between the public square and the interior garden, reflecting its double condition as a meeting place for students and at the same time as a place of work and concentration," said the firm.

To the south, is a plaza covered with stone pavers that can be used for larger events. Photographs show this area filled with tree planters on wheels, which would allow them to be moved and reconfigured according to the students' needs.

On the other side is a garden intended for contemplation or quiet meetings.

The Learning Center features a landscaped rooftop that allows students to cut across the courtyard on the upper level. Inside, it contains a mix of meeting rooms.

EBC Aguascalientes draws similarities to other concrete university campuses designed with an abundance of outdoor spaces to foster connections between studios.

Examples include the university campus that Grafton Architects completed in Lima and Barclay and Crousse's "labyrinthine" university building in Peruvian city Piura.