The successor of furniture brand Orior, which was established in Northern Ireland in the 1970s, has opened a showroom in New York City to display furniture with "spunk and flavour".

Orior was founded in Brian and Rosie McGuigan in 1979 in Newry, Northern Ireland. Brian and Rosie's son, designer Ciaran McGuigan, took over as creative director of the brand in 2012, and initiated its US expansion, launching a new office in Brooklyn and a showroom in New York's Tribeca.

"When I think furniture, I think Italians, Scandinavians... so it's nice for us to put our island up for design and also making and production as well," Ciaran told Dezeen at the showroom's opening during this year's New York City design week.

"We are definitely an Irish brand," he said.

Orior's Manhattan showroom is a linear space comprising monochrome grey floors and walls that serve as a neutral backdrop to the vibrant furniture inside.

Pieces are arranged in lounge-style layouts and include six works designed by Brian and Rosie McGuigan back in 1979. The majority of the showcase, however, is the brand's newer products that aim to reimagine the older pieces.

"We wanted to switch it up and push," said Ciaran. "Those [traditional designs] are juxtaposed with our new energy."

Contemporary details include bold pops of colour and more playful touches, like fringe and brass bases. "The colours have a little bit of spunk and flavour," he added. "They have an attitude and personality, which is important to us."

One of Orior's latest designs, a geometric wood room divider, is placed near the entrance alongside a series of colourful red and blue chairs. A narrow corridor leads from here to a larger room, featuring large sofas, tables and chairs. 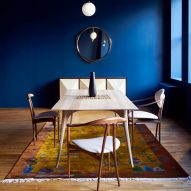 Other recent pieces include a credenza wrapped in leather, a console with marble and open grain wood, a Michael Sofa that carries on the brand's affinity for velvet, and a Nero Table with glossy wood rooted in a green marble base.

A large blue rug anchors a sitting area at the centre of the showroom, with a black leather couch and two pale chairs across from it.

All of the furniture is customisable in size and finish, and made to order by skilled craftsman with high-quality materials. The brand also still manufactures and produces 95 per cent of its products in across Ireland and Northern Ireland.

Original designs in the showroom include Pop chairs, an Atlanta sofa and the tufted Florence couch.

A set of chairs round out the original collection, including one with curves inspired by the 1960s and a more minimal seat with similarities to mid-century Danish design.

Orior is named after the street where Ciaran's father grew up, and the business continues to be run by friends and family.

When it was first established, its products were sold in boutique shops like Liberty and Selfridges in London, and the brand went on to do more contract work for high-end hotels and restaurants. Last year, the company underwent a dramatic transformation in its branding, leadership and aesthetic.

"It was a real opportunity for us to take a step back," Ciaran said. "We wanted to make a decision on how we would push onward, so we brought it back to creating a brand and designing our own pieces."

Orior's showroom is part of a host of other showrooms that have recently opened in New York City, including a corner storefront for Egg Collective, also in Tribeca, as well as Konekt's blue-room space and an outpost for DePadova.

Photography is by Claire Esparros.