Made possible through a partnership with Microsoft, the Kano PC can run standard Windows 10 applications as well as a suite of original educational tools — once its user has assembled the device from its constituent components.

The principle is the same as in Kano's original Computer Kit, but with an upgrade from a Raspberry Pi board to an Intel Atom-powered PC.

To assemble the Kano PC, the user follows step-by-step instructions presented as a storybook. During the process, they can see the LEDs on the printed circuit board light up as it's connected and explore components with a magnifying class.

As with all Kano products, the components are colour-coded to signal their function and replaceable to encourage a culture of reuse and repair. The transparent case-back keeps the parts visible throughout use. 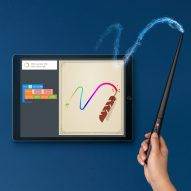 The educational experience extends to software as well as hardware.

With all the components in place and the machine on, users can access the custom app How Computers Work to make emojis through binary code, tweak touch and sound, and experiment with the processor and memory.

The object is "learning exactly what your computer is doing when you tap keys, talk into the microphone, or touch the screen", according to Kano.

"We should all have a guide, the opportunity to make a computer, to customise it, and take control of the technology that makes up our society," said Kano founder and CEO Alex Klein.

The Kano PC is preloaded with Windows 10 in S mode, which is a streamlined and more secure version of the operating system that allows only apps from the Microsoft Store.

It will come with apps including Minecraft: Education Edition, Make Art for learning to code images in Coffeescript, the Kano App for creation through coding and Microsoft Teams app for group chat and collaboration.

Kano PC is also compatible with all apps in the Office Suite, although access to these needs to be purchased separately. It has a 11.6-inch screen that is touch-enabled.

The product is targeted at classroom use by children aged six and up, with hundreds of hours of curriculum provided by Kano and Microsoft. There's no age ceiling for users though, so the kits are suitable for tech-curious adults too.

Kano began in 2012, when Klein's six-year-old cousin asked if a Raspberry Pi computer could be made as fun and easy to use as Lego.

Since then the company has gone from strength to strength, launching updated versions of the Computer Kit and partnering with Warner Bros to release the official Harry Potter coding wand last year.

Kano PC is available for pre-order from the Kano website and Microsoft store, and will ship on 21 October 2019.