Dutch designer Nienke Hoogvliet used a byproduct from the wastewater treatment process to create the dyed pattern on this kimono, which is intended to be passed down through the generations.

The Kaumera Kimono was an outcome of an exploratory project undertaken by Studio Nienke Hoogvliet for the Dutch Water Authorities.

As a world leader in water management, the Netherlands is actively engaged in trying to understand and improve the water purification process.

One of the byproducts of this process is an alginate-like material with unique functional properties.

The raw material known as kaumera is recovered from wastewater during the Nereda purification process, which was developed by the Delft University of Technology.

The extracted sludge granules contain bacteria that form a biopolymer with the ability to bother repel water and retain it.  The versatility of the material and its ability to change when combined with other substances led to it being named kaumera, which means 'chameleon' in Dutch.

To explore potential new uses for kaumera and other byproducts of wastewater treatment, the Dutch Water Authorities established the Energy and Raw Materials Factory.

This organisation invited Nienke Hoogvliet to curate an exhibition around kaumera for Dutch Design Week 2018, which included the kimono.

During her research, Hoogvliet discovered that kaumera enables textiles to absorb dyes better, so less water is needed.

The designer used two natural dyes extracted from wastewater to add colour to the textiles. 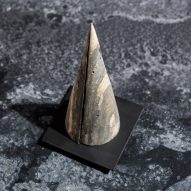 Hoogvliet is also critical of the disposability of modern fashion and the amount of waste it produces. She designed a kimono because these Japanese garments are made to last for decades rather than being worn a handful of times and disposed of.

"The Kaumera Kimono is an act of rebellion against fast fashion," the designer said.

"Kimonos are passed on for generations, cherished and valued. I want to encourage consumers to think of their clothing that way."

Hoogvliet used kaumera along with anammox and vivianite to dye panels of fabric that were assembled to form the kimono.

The minimum amount of water necessary was combined with the dye and the fabric was laid on top to absorb it. The result is a unique and organic pattern that reflects the natural materials used in the garment's manufacture.

Bio-Binding by Wand explored the possibility for kaumera to be used as a glue, while Van Katwijk's Mudernism project used the material as a ceramic glaze.

Following its presentation at Dutch Design Week, which took place in October 2018, the Kaumera Kimono exhibition was shown last month during NYCxDesign as part of Ventura New York – The Dutch Edition.

Hoogvliet has also turned wastewater into a bioplastic material that she used to create alternative cremation urns called Mourn.