Chen has created five commonplace office items that can also be used as tools to relieve the stress of a long working day, for his Inte-rest-ing project.

The items include a fan that requires the user to breathe deeply to get it started, a calculator with simple stress-busting games built in, along with a mouse, USB stick, and a pen.

Each object seeks to redress the pressures of overtime culture.

"This project aims to alleviate stress and encourage play at the desk whilst working in an intense and competitive environment," Chen told Dezeen.

"The idea is that by bringing them some interactive pleasure in the space of their working station, they can become masters of their objects, their work and self-efficiency."

Chen worked on the Inte-rest-ing series following a period of research into working culture in China and around the world.

He found that employees felt ashamed of taking breaks in their working day and didn't feel able to express their personality in the work place.

Some reported slowing down in order to appear busier and more productive to their bosses, as staying at work late is often associated with hard work.

Within the collection Chen created a desk fan that allows an overtired worker to control their breathing with gentle breathing exercises.

To turn the fan on the employee must breathe on the small turbine at the top of the object, or even release a deep sigh "to relieve the pressure". In turn, the gentle air from the fan will calm them down further.

Chen also built a set of easy-to-complete games into the calculator, that get around the fact that employees are constantly monitored by managers at work.

"When staff feel bored or tired at work, they can relax and entertain themselves with a quick game and they do not have to worry about being caught by their manager while potentially breaking the rules in an open office," he said.

"By disguising relaxation activities via the most common office activities, perhaps the manager will think that you are calculating projects."

Chen designed "digital fortune cookie" software for a computer mouse that monitors whether the user is distracted or exhausted by the speed and number of times they roll the mouse.

When activated, the programme emails a reminder to the user, which pops up on their screen with a pre-arranged topic, such as their horoscope, or an update on their pet. They can choose whether to open it for a brief moment of respite. 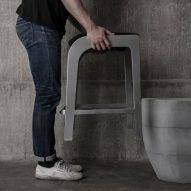 The USB stick allows employees who feel "demoralised or dispassionate about their work" to vent their frustration by smashing it on the desk or squeezing it like a stress ball. This action releases the USB from its holder, so that the worker can use it.

The final object in the series is a pen that emits a gentle rattling sound as you write, caused by a set of small objects implanted in the pen lid. Along with the naturally relaxing activity of writing rather than typing, this should work to relax the user.

His project also adds to a movement begun by an anonymous computer programmer, who launched the website 996.ICU.

The site is named after the common practice in China of working from 9am to 9pm, six days a week, and seeks to boycott this culture by clearly stating the country's labour laws. It is now available in six languages.

Given long working hours during which "the worker works like a machine without seeing any meaning of their work", Chen's objects offer a moment of respite.

The designer 3D printed the objects and built the internal circuits and software himself, in collaboration with Imperial College and Gudong University of Technology.

A group of third-year students at Central Saint Martins recently completed a project that saw them redesign prison cell furniture, with the resulting designs to be made by the prisoners themselves in on-site workshops.