Istanbul Design Biennial 2014: Ines Kaag and Desiree Heiss are presenting a computer with a keyboard made of punching bags at the Istanbul biennial to encourage office workers to be more physical during the working day (+ slideshow).

The two designers, whose fashion and design studio Bless is divided between Berlin and Paris, developed the Workout Computer to "blur the boundaries between working in the office and working out". 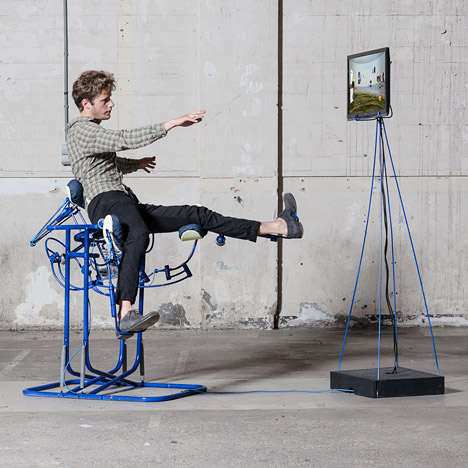 The computer's screen rests on a table as normal, but instead of having a keyboard it is surrounded by dozens of punching bags in different shapes and sizes, each displaying a different letter, number or character. When the bags are punched the corresponding letter appears on the screen.

Some sit on the table while others are freestanding, and some are suspended between the ceiling and floor. Most are within arm's reach, but some need to be kicked or trodden on.

"The Workout Computer would be our everyday dream office tool," Heiss told Dezeen at the exhibition preview.

"Personally we would love to be, at the end of the working day, physically as exhausted as mentally."

The designers believe the project offers a better live-work balance than the typical routine of many office workers who spend their days in front of a screen, then visit the gym in the evenings to keep fit and remedy the associated "aches and pains".

"We think that technology goes a little bit in the wrong direction with making things only faster but not as physical as work used to be," said Heiss.

"We thought this would be a much more modern way of living than working at the office with back pain and then doing a little bit of sport in the evening."

"You would be able to physically feel the amount of work you did at the end of a day and really fall to bed exhausted," added Kaag.

The project is on show at the Galata Greek Primary School for the Istanbul Design Biennial 2014, which bears the title The Future Is Not What It Used To Be.

Throughout the exhibition visitors will be invited to try out the keyboard and type their own messages.

One punching pad will allow everyone to print out what they've typed, while also posting to a dedicated Twitter feed.