Sam Jacob Studio has turned the two dimensional graphics of cartoon strips into three dimensional architecture to create the colourful interiors of the Cartoon Museum in London.

Sam Jacob Studio designed the permanent home for the Cartoon Museum in Fitzrovia, central London, to be a joyous, colourful space.

"I think anyone entering the cartoon museum would be disappointed to come out less happy than when they went in," said Sam Jacob, founder of the studio.

"We wanted to create a place that was inspired by the world of cartooning, where exaggeration and imagination confound your expectations," he told Dezeen.

The museum contains a permanent gallery, a space for temporary exhibitions, a Clore Learning Studio, and shop, as well as offices for its staff and an archive.

The entrance spaces take their visual identity directly from cartoons, with cartoonish holes punched through walls and doors that shift scale. These take their cues from John Tenniel's illustrations for Alice in Wonderland.

"We thought about each architectural element and imagined how it might perform if it were in the graphic world of cartoons," explained Jacob.

"Each moment in the project was a chance to think about the difference between things in the 'real' world and things in the drawn world, and how we might bring them closer together."

The studio aimed to make the spaces and the connections between them as fun and cartoonish as possible, with a fake bookcase hiding a secret door to the Clore Learning Studio, while a graphic hole is punched in a wall to connect the stair to the entrance space. 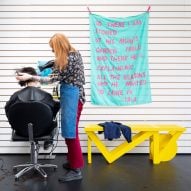 "I've always wanted to make a window as a smash, so a graphic language turns into architectural element, so it was very satisfying to finally find an appropriate home for that idea," said Jacob.

"I love too the secret bookcase, which is cartoon villain on one side and Le Corbusier on the other."

Alongside the cartoonish entrance and circulation spaces the main gallery space has a more typical white-box interior which contains a permanent display of cartoon and comic arts.

Throughout the museum the studio has aimed to combine the two dimensional and the three dimensional, including its plan, which is intended to be like a "cartoon strip".

"A lot of the play is between two dimensions and three dimensions. In the plan, it's organising the spaces as if they were frames in a cartoon strip – except here you can choose your own sequential narrative," said Jacob.

"Part of the space seems drawn and two dimensional, while other parts seem like extending the drawn world onto the physical world of architecture," continued Jacob.

"In some sense this is what all architecture is, except here we've had the opportunity to be explicit about the representational nature of architecture."

Sam Jacob Studio was established in 2014 by Dezeen columnist Jacob, one of the three founders of influential architecture studio FAT.

The studio recently created a hairdresser in Peckham, south London, where artworks are placed where mirrors are usually placed.