An exhibition of monumental geometric black sculptures by the late American designer Tony Smith on display at Pace Gallery in Manhattan brings together three works for the first time.

Source, Tau, Throwback is a three-piece installation at Pace of sculptures created by Smith during his career as an artist in the 1960s and 1970s.

The individual works – Tau (1961-62), Source (1967) and Throwback (1976-77) – possess "no traditional front or back". Each is made up of a combination of black-painted steel tetrahedrons and octahedrons, fused together as a single volume.

"The works in the exhibition epitomise the artist's characteristic black-painted aesthetic articulated in large-scale and mathematically-determined geometric forms," said the gallery.

They have been grouped together for the first time, filling the white gallery space.

Tau was designed by Smith for Manhattan's Hunter College and was to be placed outside to animate the environment.

It is constructed of tetrahedral steel volumes with acute and oblique angles in a cantilevered form resembling the letter T. The piece is finished in semi-gloss black paint.

Source is a more linear design that comprises two united sections that span more than 25 feet (7.6 metres). It is over nine feet (2.7 metres) tall, and was first exhibited in Kassel, Germany. 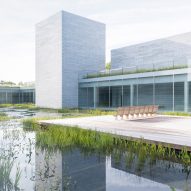 The final volume in the exhibit is Throwback, which features a hollow portion.

It was originally presented at Smith's first exhibition at Pace Gallery in 1979, where the volume was displayed as a painted plywood version and a smaller version in black-painted steel.

For the current show at Pace, the gallery has exhibited Throwback as Smith initially envisioned, rendered full-size and in painted-black steel.

Pace represented Smith's work up until he passed away in 1980. This is the first exhibition dedicated to him since the gallery began representing his estate in 2017.

Born in New Jersey in 1912, Smith developed his sculptures through his experiences in architecture and art. In 1937, he moved to Chicago to study architecture at the New Bauhaus under László Moholy-Nagy, but left to work for Frank Lloyd Wright.

He went on to become an independent architectural designer specialising in private homes, as well as spending time in Hollywood, California and Germany.

Other sculptures by Smith include Smug at Glenstone contemporary art museum in Maryland, that has been expanded by Thomas Phifer, and Smoke at the Los Angeles County Museum of Art (LACMA).