Brighton University graduate Laila Laurel has designed a chair that prevents people from "manspreading", as part of a project that aims to offer solutions to sexist issues experienced by women.

Laurel's pair of chairs, titled A Solution for Man-Spreading, were created as a tongue-in-cheek response to both hers and other womens' day-to-day experiences of "manspreading".

"I think humour is a really interesting tool in order to tackle social issues," she told Dezeen.

Manspreading is defined as the practice of people, typically men, sitting on public transport with their legs wide apart, encroaching on other peoples' seats.

Laurel designed two chairs in a bid to create a physical representation of this "frustrating" everyday issue.

She used sycamore and cherry wood to make the chairs, designing them to mirror each other in shape to create visual continuity between the pair.

"I think encouraging women to consider the way in which they move through the world or the space they take up in relation to men is powerful, because it is such an intrinsic and huge issue, and yet one that is not always considered," explained Laurel.

"I think men have a tendency to command space and require women to move for them far more than vice versa," she continued. "In order to achieve gender equality it is imperative to consider many different aspects of sexism."

The chairs were designed as part of a year-long project called Feminism in the Third Dimension, in which Laurel has attempted to use design to identify, and offer solutions to, sexist issues experienced by women.

The Norfolk-based designer began her research for the project by spending an hour riding different trains between Brighton and Portslade – a journey she makes frequently for her commute to and from work. 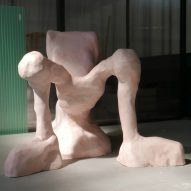 She walked up and down the trains to see if she could spot any examples of men manspreading and intruding onto women's space first-hand, and found multiple cases in a short space of time.

One instance that particularly stood out to her was a woman having to sit sideways on her seat with her legs in the aisle due to a man stretching his legs all the way over into her foot-well.

"I hope the message my current and future works send is that of a young woman that is using her design practice in order to create fun, powerful and interesting work surrounding equality and feminism," the designer said.

Laurel's chairs, which won the Belmond Award at the New Designers show in London, are not the first designs dedicated to empowering women through seating.

Design Academy Eindhoven graduate Anna Aagaard Jensen also designed a series of manspreading chairs that encourage women to claim more space with their bodies when sitting, and are off-limits to men.