Vitor Borges and Franck Laigneau set one-off vintage furnishings against whitewashed walls to create a series of unique spaces inside this boutique hotel in southeast Portugal.

Dá Licença is located a few miles outside the historic city of Estremoz, perched atop a hilly 120-hectare plot of land that's blanketed in mature olive trees.

With a total of just eight guest rooms, the hotel has been developed by creatives Vitor Borges and Franck Laigneau to be more akin to a guesthouse where visitors "already feel at home".

"Today in Europe, where can you find a place that is still preserved? This is why we decided to do something very discreet – the region gives the impulse to retreat into nature, for slow living," Laigneau explained to Dezeen.

"We have all the services of a hotel, but in a more personalised way."

The land had previously been host to the ruins of agricultural outhouses that were used by a convent of nuns in the mid-19th-century to grow vegetables, and later by a commune of farmers to produce olive oil in the 1980s.

Borges and Laigneau enlisted the help of locally based architecture practice Procale to transform them into three whitewashed buildings that could host the hotel's amenities.

One building accommodates a series of communal spaces. These include the dining area, which is centred by a tapered hanging sculpture with a bark-like surface, and a living room, where sage-green armchairs are arranged around a stone coffee table.

Here there are also two guest rooms and two suites, both of which come complete with their own private pool and sun loungers shaded by straw umbrellas.

The remaining rooms are spread across two other buildings that also have simple white-painted surfaces.

Decor is provided by a selection of furnishings and ornaments produced during the 20th-century arts and crafts movement, which Borges and Laigneau have picked up on their travels throughout Europe. 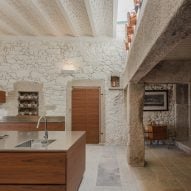 "[The hotel] isn't meant to be a museum. There is art everywhere, but informally so; it is not intended to be exhibition-like and imposing," the pair explained.

In a subtle nod to Estremoz's marble-rich terrain, the natural stone has been used to craft sink basins, bath tubs, and pink-hued shower cubicles.

Throughout the hotel, doors have also been swapped for arched open walkways – a move which Borges and Laigneau hope will encourage guests to move freely between rooms and let cooling air flow during the warm summer months.

"There is a minimal and monastic side to Dá Licença, but it is never less than cosy and inviting," explained the pair.

"Luxury here is also about space and time. There is room to socialise but there is no lack of places to be by yourself."

A below-ground room that was once dedicated to oil pressing has been transformed into a space where Laigneau can display personally favoured pieces he's acquired during his time spent working at an art gallery.

Dining tables and chairs are dotted in between, allowing the space to double-up as a 30-cover restaurant.

As tourists seek to explore parts of Portugal that lie beyond already popular spots like Lisbon and Porto, hotels are increasingly popping up in the country's rural regions.

Two years ago PROD converted an 18th-century manor house in the village of Ponte de Lima into a hotel, where bedrooms are organised around an internal courtyard. In 2016 Par created guest accommodation on the edge of the Algarve's Ria Formosa lagoon which features staircases on its front facade that lead up to a roof terrace.