"I think that in the near future there's going to be a big shift," she told Dezeen. "Everybody is going to take a big leap towards sustainable fashion."

"Right now we are all talk, everybody is talking about how important sustainability is, but we need to see results."

According to Mora, we will see significant changes in the next three years, particularly from companies like LVMH and Kering, which between them own labels including Céline, Louis Vuitton, Dior, Gucci and Yves Saint Laurent.

She points to Chanel as an example – the fashion house recently announced a ban on the use of skins from exotic animals like snakes and crocodiles, as it felt it was unable to source them ethically.

"Things are going to change. In the near future, maybe two to three years latest, it will happen for sure," said Mora.

"The companies have to go where the money is, and that's where the consumers are – they are changing their minds and they're starting to be more conscious."

Animal leather was banned from the catwalks at Helsinki Fashion Week 2019, which took place in the Finnish capital from 19 to 22 July. Designers were instead encouraged to work with plant-based leathers and other sustainable textiles.

Austrian fashion house Shohei was among those that took notice. Its show featured textiles from New York-based brand Ultrafabrics, which manufactures a range of innovative leather-like materials.

The event also featured an exhibition from the VTT Technical Research Centre of Finland, which is developing a leather substitute made from mushroom mycelium, and a space called the Bio Playground, where brands showcased pioneering materials and responsible supply chains.

"These problems are solvable"

Mora said the aim of this year's event was to send a message to the industry that it can no longer ignore the impact that leather farming has on the environment, particularly its contribution to climate change.

She wants Helsinki Design Week to go beyond the traditional role of a fashion event and become a platform that facilitates change through innovation. 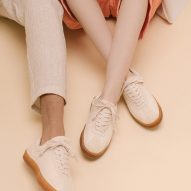 Eight companies and designers making trainers as sustainable as possible

"We believe the industry needs to rapidly develop," said Mora. "We've done extensive research on the animal leather industry, on the whole supply chain, and we have come to the conclusion that these problems are solvable."

"I really appreciate companies who have the courage to start to develop things," she added. "I really want bigger companies to be okay with the fact that they don't have everything figured out. But they need to start taking steps and we can help them develop."

Mora launched Helsinki Fashion Week in 2012, aged just 22. Featuring both Nordic and international designers, the event had a focus on sustainable fashion from the start, although this year's was the first to introduce a leather ban.

The move follows the wider growing trend for vegan design, led by designers and brands like Stella McCartney and Erez Nevi Pana. Among the latest plant-based products to go on sale are Native Shoes' Plant Shoe and Buffy's feather-free bedding.