Weathering steel, concrete and glass were used to form this asymmetrical dwelling by Mork-Ulnes Architects that is nudged into a hillside overlooking a verdant, rolling valley in northern California's Sonoma County

Mork-Ulnes Architects – which has offices in San Francisco and Oslo – was charged with creating a home that not only met the clients' needs, but also responded to the threat of wildfire.

"The initial challenge of the project, which really shaped the form of the building, was how to embrace the very steep slope and views of the site while creating access for fire trucks in this wildfire-prone area," said architect Casper Mork-Ulnes in a project description.

The team designed the two-storey Triple Barn house to slot into the sloped site, which offers sweeping views of an undulating valley blanketed with trees and vineyards. The upper level, which houses the main living functions, is roughly rectangular in plan with a slight curve.

It sits atop a smaller lower level, which encompasses an office, storage and a laundry room, along with a carport that occupies a sheltered void. Adjacent to the home is a wide driveway that can accommodate fire trucks.

The house is topped with three gabled roofs that delineate distinct zones within the dwelling. Concrete was used for the lower portion of the building, while weathering steel wraps the upper level. 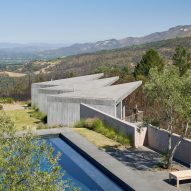 "We chose Corten steel as the cladding material for its natural resistance to fire, as well as its resonance to agricultural buildings of the Sonoma Valley," the firm said, noting that the siding also takes cues from the site's reddish, iron-rich soil.

The 1,750-square-foot (163-square-metre) property forms the home for Hollie Greene Rottman, a chef and healthy food educator, and her husband Jim, a pharmaceutical executive.

As former residents of San Francisco and New York City, the couple desired a full-time, countryside residence that would offer a tranquil atmosphere and a strong connection to nature. They also needed plenty of space to host cooking classes and to entertain family and friends.

The dark exterior of the house contrasts with the interior, which is kept light and airy. Douglas fir, natural stone and white walls are among the finishes. Vintage light fixtures are mixed with contemporary decor in "sun-bleached" hues.

"The interior was meant to have simple and bright materials to give the house a casual atmosphere," the studio said. "All walls were kept white to keep the space bright and to allow for large windows to captivate with their views."

From the lower level, the main floor is accessed via a winding stair. One side of the floor contains a kitchen and dining room, while the other houses the master suite. The living room and two guest bedrooms were placed in the centre of the plan.

While open and fluid, the layout offers moments of privacy, such as seating areas where the Rottmans can gaze out the window and take in the scenery.

"Built with an open floor plan, the house and its furnishings were cleverly designed to provide the family with many small private nooks," the team said.

The home has many distinctive elements, but the centrepiece is a professional-style kitchen, where open-faced drawers provide easy access to cooking gear, and a "hidden pantry" conceals appliances and tableware. A handmade, walnut farm table adds a cosy touch to the streamlined space.

An oversized, sliding glass door enables the kitchen to seamlessly flow into a covered terrace, which is fitted with lounge furniture, a grill and a bar.

"The kitchen is expanded outdoors under a large, cantilevered eave, which creates a shaded respite from the hot Sonoma sun," the team said.

Beyond the terrace is a five-bed vegetable garden, along with a fire pit and a mature oak tree. The Rottmans describe their home as a "healing sanctuary".

"It's peaceful and private," they said. "We love reading outside, working in the garden, and taking shade under the large oak tree."

Mork-Ulnes Architects has an extensive portfolio of homes that embody the firm's Scandinavian roots mixed with a "Californian openness to innovation".

Other residential projects by the studio include the Ridge House in Sonoma County, which consists of a trio of concrete volumes with angled roofs, and a timber-clad dwelling with a pinwheel plan in a Norwegian forest.