Design studio Workstead has transformed a 19th-century house in Hudson, New York, into a showroom for its furniture and lighting.

Workstead overhauled a property in the Hudson Historic district that was built in the late 1880s as the home of former New York mayor Cornelius H Evans.

Featuring a red-brick and carved-sandstone exterior, it is classed as one of America's Queen Anne homes – an architectural style that flourished in the US at the turn of the 20th-century.

Workstead's design focuses on the interior, and preserves the residential layout and original details of the house to create a backdrop for its designs. The property also includes a studio space.

"We have always been interested in the intersection of modernism and craft, but more than ever are considering the buildings that we work within and how to create a lasting dialogue between interior and exterior," says Workstead co-founder Robert Highsmith in a project description.

"The town is home to an incredibly vibrant community and the new studio has such a special provenance – I'm proud that our work is at ease within such a meaningful building." 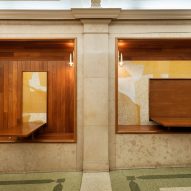 Among the key areas is the lounge, where a number of designs created by Workstead, including a plushy sofa and a wooden dining table and chairs, provide furnishings. Sculptural brass light fixtures, Chamber, that the studio launched earlier this year add warmth to the showroom.

Adjoining this is a dining area with dark wooden wainscoating that match panels across the ceiling. These hues create a moodier setting for other works.

Workstead intends to change the pieces on show at the Hudson property every three months. Products will be updated twice a year, while prototypes will be shown more regularly.

The Hudson outpost will accompany Workstead's studio in Brooklyn, where it conducts its architecture and interiors work. "The Hudson studio represents our evolution as a design practice," Highsmith said.

Workstead has completed several renovation projects that reference the style of the buildings they occupy. Among these are a handful in Charleston, South Carolina, where the husband-and-wife team ran a studio before moving to New York.

The duo transformed a home in the city for themselves, where they reimagined "heritage elements as modern luxury", and preserved plaster- and paint-splattered brick walls during the overhaul of another residence nearby.

Photography is by Jeff Holt.