London College of Fashion graduate Chloe Baines has designed a collection of clothing and jewellery from the upcycled tents and metal pegs left after music festivals.

The collection, called In Tents: The After Party, was designed in collaboration with Central Saint Martins graduate Belle Smith, who made matching earrings and rings from the tent pegs.

Clothing in the collection includes plastic tops, dresses and skirts made from discarded tents.

Baines was first inspired to use old tents for clothing when visiting the British Boomtown festival in 2018, where an announcement was made during the closing ceremony about the vast number of tents left behind as waste.

"This became very real the next day when my friends and I were some of the last people to pack up our things and leave the site," the graduate explained.

"There were so many tents left behind that it looked as though nobody else had actually left."

As Baines told Dezeen, she noticed that many of the tents had been stitched together, so she wanted to see if they could be sewn together in the same way to make clothes.

With the intention of creating a fashion line, the group of friends collected as many tents and tent parts as they could, including the pegs and ropes.

Following this, Baines continued to collect damaged or unwanted tents from mutual friends, organisations and campsites.

By using materials that would otherwise be thrown away, Baines hopes to "bridge the gap between experimental fashion and sustainably driven design".

"It is a really enjoyable challenge to use recycled materials," said Baines. "And I have always used them where possible in my work."

"I think now that we are all so aware of the issues surrounding waste, particularly in the fashion industry, it's a responsibility for new designers to consider how they can sustainably source their materials and inspire others to think in this way as well," she added.

When making the tent garments, Baines tried to use as much of the tents' existing hardware as possible, and attempted to repeat the existing seams, as well as working with the bright colours of the tent material.

"I have always been very critical of using lots of colour in my work," Baines told Dezeen. "But in utilising the existing colours of the tents I have come to really enjoy the vibrancy."

"At first, I also found the tents really challenging to use and manipulate, but after a lot of experimentation, I stopped trying to change too much of the existing finishes within each tent and started allowing their existing elements to inspire new designs," she continued. 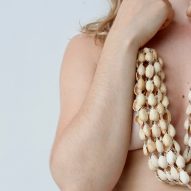 She experimented with all of the different parts of a tent, for example by knitting guy ropes together and creating steel drop-beads made from tent pegs.

Central Saint Martins graduate Smith explained how she was inspired by the original purpose of the tent pegs when making the jewellery for the In Tents collection.

"They are designed to keep you grounded; they secure your home," she said. "So I wanted to play around with this idea of weight, heaviness and gravity."

"I wanted to capture the heavy industrial feel of the tents, but also the lightness and beauty of the transformation and outcome," Smith added.

Comprised of aluminium or steel, each jewellery piece was designed to accentuate the inevitable wear and dents in the pegs.

In a previous project, Smith repurposed discarded pistachio shells and combined them with precious metals to create delicate jewellery pieces.

In addition to bringing the wearer close to nature, Smith also hoped to promote a more sustainable design approach in her jewellery collection by making use of natural materials that would otherwise be thrown away.