A $100 million alteration designed to prop up the sinking and tilting Millennium Tower in San Francisco has been approved as tenants reach a tentative settlement with its developers.

Independent experts have endorsed the plan to fix the 58-storey luxury condominium tower, which has sunk 18 inches (45.7 centimetres) and tilted 14 inches (36 centimetres) since completion in 2008, reported the San Francisco Chronicle.

It is estimated to cost $100 million (£81.8 million), which will be paid for as part of the insurance settlement.

News of the approved upgrade comes as a tentative settlement is reached between the building's homeowners association, developer Millennium Partners and Transbay Joint Powers Authority, following a year-long legal battle.

While the settlements are not disclosed, all 400 tenants are expected to receive compensation for the tower's sinking. 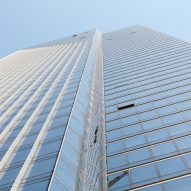 Attorney Niall McCarthy, who is representing 125 tenants across 88 units, told the San Francisco Examiner that it included individual lawsuits for roughly 250 tenants, and a class action lawsuit for the remaining 150.

"Because [the] settlement is tentative we can't discuss [the payments] but they are very significant payments for individual unit owners," said McCarthy. "The clients are all extremely happy."

Designed by Handel Architects, the Millennium Tower is currently the tallest residential building in San Francisco, and the city's third tallest overall. Its sinking was first discovered in 2016 through a study produced by engineering firm Arup.

Millennium Partners blames Transbay Joint Powers Authority (TJPA) in part for the the tower's subsidence, claiming that the construction of the nearby Transbay Transit Center is adding to the issue. TJPA said it bears "no responsibility for the tilt and excessive settlement" of the Millennium Tower.

The tower's movement caused further concern in 2017 when engineering company Allana Buick & Bers found that it had dislodged the curtain wall away from the main structure, leaving a gap where smoke and fire could quickly spread.