Architects Luigi Valente and Mauro Di Bona have renovated the former church of Saint Rocco in southern Italy into a theatre with a black and white interior.

Located in the small commune of Rotello near Campobasso, the historic landmark has been restored into a permanent performance venue and multi-purpose hall.

Fragments of the stone floor stand out against the white-washed theatre space, hidden within the existing exterior masonry walls.

The ornamental interior, including the cornice, pilasters and arched niches were previously painted white but showed uneven broken paintwork near the ceiling.

The church's beige natural stone flooring was replaced with a white floor to match the walls, where the majority was repainted to create a solid uniform colour.

Arranged in the centre of the auditorium are 90 small black armchairs facing the stage, which will be used for for theatre performances and conferences.

In front of the seating, the architects retained a remnant of the natural stone flooring laid in an irregular semi-circular formation.

"Information about the first church is very fragmented," Valente told Dezeen. "Founded around 1300, only the old floor was visible at the time of renovation."

The continuous white colour of the overall interior breaks into the line of the stone arc, designed as a visual nod to the renovation process of Saint Rocco's church.

A series of previous renovation projects to the building had caused the old church to become unused. The original timber ceiling had been demolished with a false ceiling installed. 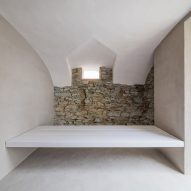 Valente and Di Bona removed this and reconstructed a timber ceiling using the original wooden beams, which can now be seen spanning the hall at regular intervals.

The architects designed adjustments to the stage, entrance points and the internal flooring to update them according to modern safety regulations.

New accessible toilet facilities have been installed behind the rows of seating near the entrance.

A white staircase winds up the corner of the hall leading to a mezzanine floor, with two stepped rows of additional seating available.

Following an epidemic in Rotello in the 1600s, the church was named after the patron saint Rocco, protector against the plague.

The community began to use the structure to host theatrical performances from the 1950s. As the renovation allows for the church to continue hosting performances, the architects aimed to amplify the status of the building in the town which has an "absence of structures".

Natural stone fragments complemented with smooth surfaces can be seen in a house in Menorca by Nomo Studio which references its vernacular materiality, whilst artist Matthew Simmonds carved historic architectural features into miniature marble sculptures.