Pictures have been revealed of the ring made by Apple's departing design chief Jony Ive and his frequent collaborator, renowned designer Marc Newson, from a single enormous diamond.

The duo designed the all-diamond ring last year for AIDS charity (RED), whose chief operating officer Jennifer Lotito describes the piece as "a thing of absolute beauty and sustainability".

Sotheby's auctioned the ring at Design Miami in December 2018, where it was purchased by an anonymous buyer for US$256,250.

Since the whole ring, band included, is cut from one diamond and cannot be resized, it was crafted bespoke for the buyer after the auction.

Ive and Newson's design was executed by the Diamond Foundry, the USA's leading producers of lab-grown diamonds, which has shared photos of the finished product.

The company grows diamonds above ground at its foundry in San Francisco using a process that simulates how the gemstones would naturally form in the earth's core.

The company's products are free of the environmental and social costs associated with traditional diamond mining — hence the "sustainability" claim.

The carbon-neutral foundry said Ive and Newson's "ambition made possible by the extraordinary scale of the stone". Its team grew a 45-carat rough diamond, cut it using a laser guided by a micrometer-thick water jet and polished it.

The finished ring closely matches Ive and Newson's blueprint, including the promised 2,000-3,000 facets — a never-before-seen amount.

"A project of this size and quality would not have been possible using a mined diamond," said Diamond Foundry CEO Martin Roscheisen. "The craftsmanship of the (RED) Ring represents a major milestone in the diamond industry." 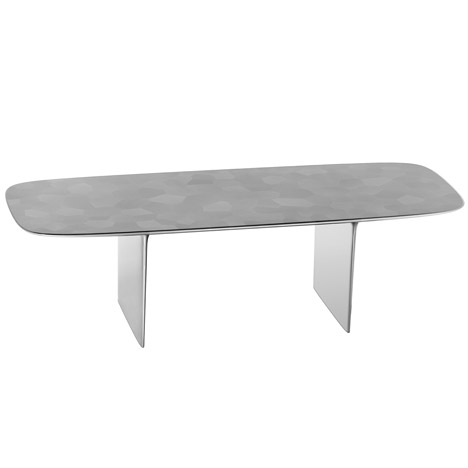 The (RED) Desk by Jonathan Ive and Marc Newson

"This is more than just a ring," added (RED) COO Jennifer Lotito. "It's a thing of absolute beauty and sustainability which is going to save lives. We're so grateful to Jony, Marc and Diamond Foundry for delivering exquisite design and craft to help end AIDS."

The Bill and Melinda Gates Foundation matched the ring's purchase price of US$256,250 with a 90 per cent donation, meaning the ring raised a total of $461,250.

The (RED) organisation was started by U2 musician and activist Bono to fight HIV/AIDS. It has held several high-profile auctions, including one curated by Ive and Newson in 2013.

The friends and collaborators designed a one-off Leica camera for that event. They have also worked together at Apple, including famously on the Apple Watch.

Among their more unusual collaborations was a deconstructed Christmas tree for London hotel Claridge's.

Ive is set to depart Apple later this year after nearly 30 years with the company. He'll be starting his own studio, LoveFrom.