Surveillance culture and climate change are the focus of the campaign for band The 1975's latest release, which features augmented reality, neural networks and glitchy graphics.

Creative director Ben Ditto worked with a group of designers and coders to create the campaign, which aims to investigate "environmental collapse, surveillance culture and the contemporary nihilism that is present on social media".

The campaign, which was created to promote the band's new song People, explores a range of "utopian and dystopian" technologies that Ditto felt reflected current issues surrounding privacy, technology and the environment.

"It's zeitgeist and it's now," said Ditto. "We wanted to investigate how you can talk about these terrifying and exciting things in the context of very popular culture," he told Dezeen.

Designed across several different digital platforms, the campaign comprises a music video, a website and Instagram augmented reality filters that fans can use themselves.

Initially released alongside a climate essay by 16-year-old Swedish activist Greta Thunberg, all the branding for the single is united by a neon-yellow band. This was adapted from the graphic identity created by Samuel Burgess-Johnson for the band's forthcoming album Notes On A Conditional Form.

The first set of visuals for the campaign were hosted on the band's website, which included a countdown timer and glitching nature scenes with Getty Image branding that changed daily.

Emmony created the imagery by training a neural network – a type of machine learning modelled on the structure of the human brain – with serene stock images against images of destroyed landscapes, waste heaps and deforestation.

Clips from the live visuals I created with @ben_ditto for @the1975’s track with @gretathunberg. Generated with a neural network trained on serene stock footage of earth vs. imagery of scarred landscapes, trash heaps and deforestation. #AI #The1975

Alongside this, Wild developed a custom effect that responds to the touch of the user on a smartphone, mouse or trackpad, which glitches and distorts the landscape scenes. The effect is intended to echo the impact of the human touch on the environment.

As days passed by on the countdown, the impact of the interaction increased and the glitch became more significant. 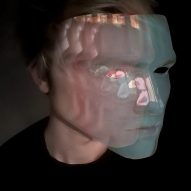 The timer counted down the days until the release of the song and music video for People, which was directed by Ditto, Warren Fu and the band's singer Matty Healy.

Created with what Ditto describes as "screenshottable moments", the video was shot inside a five metre by five metre cube of screens and was filmed using a robotic camera arm with motion control.

Visuals by Emmony flash across the screens displaying "uncomfortable" imagery while the band perform, including one scene where Healy blows himself up using a device filled with Facebook like symbols and emojis.

The video also has augmented reality filters mapped onto the footage, a move that the team believe to be "quite innovative and first of it's kind".

To develop the filters, Ditto worked with Aaron Jablonski of Exit Simulation, a leading developer on Spark AR, which is Facebook and Instagram's augmented reality platform.

FATAL EXCEPTION 🎭 @exitsimulation made a filter for @the1975 so you can be IN THE “PEOPLE” VIDEO omg. Find it on their IG

The filters were intended to further channel the dystopian themes running throughout the campaign.

As well as being used in the music video, the filters were also published on The 1975's Instagram account, allowing fans to use and share them.

Facebook's Spark AR platform recently went into a public beta mode, meaning anyone can now create and publish their own augmented reality filters.