Please Be Seated is a giant outdoor seating installation made of three concentric rings of wave-like forms made from scaffolding planks.

Created by British designer Paul Cocksedge, the communal bench has been built in Broadgate for the London Design Festival.

Built in Finsbury Avenue Square alongside Make's Number One Broadgate office block in the City of London, Please Be Seated is made of three rings of benches that rise and fall in a wave-like pattern.

Each of the undulating forms – which increase in size and height from the smallest central element – are made from a steel structure topped with scaffolding planks.

Where the waves meet the ground they form benches, with the rising waves forming access routes to the central seating areas. 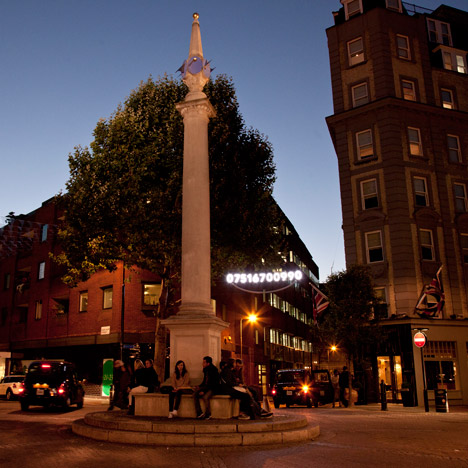 "The floating illuminated telephone number had no explanation" - Paul Cocksedge

"Every single aspect of this is tailored to its environment as well as the function it serves," said Cocksedge.

"The curves raise up to create backrests and places to sit, as well as space for people to walk under, or pause and find some shade," he continued.

Cocksedge created Please Be Seated to enhance London's largest pedestrianised neighbourhood by being a installation which is also a useable piece of street furniture.

"It walks the line between a craft object and a design solution," said Cocksedge. "It occupies the square without blocking it."

Cocksedge established Paul Cocksedge Studio with Joana Pinho in 2004, with the studio creating numerous installations, including a floating illuminated telephone number that "had no explanation" also in London.

He has also designed many works of furniture including a series made from the floor of its own studio.

Please Be Seated is one of many public installations that have been created across the city as part of the 2019 London Design Festival, which runs from 14 to 22 September.

As part of the festival Sam Jacob has created a cartoon-style animation showing a watery scene filled with rubbish to highlight the threat plastic poses to the oceans, while Kengo Kuma has designed as installation made of reinforced bamboo.