Creative networking organiser Glug has launched its #ProtestByDesign campaign that aims to create the world's biggest database of protest posters in support of the global climate strike today.

Glug tasked a group of creatives from the design and advertising industry to submit their posters to a large digital archive, which currently contains 150 designs.

Protesters can access the archive free of charge to download designs, or they can also create and upload their own, adding to the continually growing open-source set of placard designs.

Printed posters are available for strikers to pick up on the steps of London's Tate Britain gallery this morning where marchers are gathering, before heading to Trafalgar Square for what organisers are hoping will be the biggest climate change protest in history.

"The Climate Crisis affects people in different ways, which has led to a range of different themes and topics being explored within the designs we've seen, from plastic pollution to fossil fuels and rising sea levels," said Glug CEO, Pete Bowker.

"It's an issue we know our community really cares about," he continued. "Presenting them with a creative brief, which combines the creation and use of placards it resonates back to the forefront of the UK Student Climate Network (UKSCN) movement, and how it's grown."

"Asking people to donate their time and talent to collaborate and spread a positive message felt like the best way to encourage engagement," Bowker added.

From Thailand and India to Germany and Australia, people from over 150 different countries are taking a day off from school and work to protest against global warming today, Friday 20 September.

By staging these protests, strikers hope to put pressure on governments and people in positions of power to take action on the climate crisis. 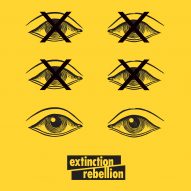 Glug hopes that the protests will bring over one million people out onto the streets of the UK ahead of the United Nations Climate Change Summit, which begins in New York on 23 September.

"Taking just one day off not only allows this to happen, but it also reaffirms to people that they are not alone in their concerns. They are part of a global movement," said Bowker.

"Change occurs when multiple individuals come together in the same location, at the same time and make their voice heard in unison," he continued.

"If enough individuals take part it gains the attention of large companies and management at C-suite level, which then trickles down into smaller businesses."

By creating the poster design database, Glug wanted to offer an inclusive resource that wasn't limited to just creatives, or creative industries.

"People don't always have the time, or skill to create posters," Bowker explained. "By creating something rooted in collaboration with a DIY nature it comes back to the essence of what protests are all about in terms of people coming together to stand up for a cause that they all believe in."

Judges including photographer Rankin, organiser of Glastonbury Festival Emily Eavis and director of Tate Modern Francis Morris will award prizes to the most eye-catching posters.

"Glug wanted to spread the word and call out to the creative community to help. We're an industry rallying round the students who face an uncertain future if we don't all take action. It's vital for grown-up industries to offer their support," said Bowker.

The campaign is supported by outdoor media company Clear Channel, which is displaying the posters across 156 multiple digital outdoor screens today. 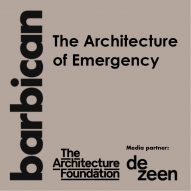 Last night, 19 September, architects joined with leading academics and activists at the Architecture of Emergency summit in London's Barbican Centre, to consider how the architecture industry should respond to a climate emergency.

Extinction Rebellion, Haworth Tompkins, Maria Smith, Adrian Lahoud and many others delivered presentations about the climate crisis at the event, which readers can watch back in a livestream of the talk by Dezeen.