An expansive green roof, bird-friendly glass and copper accents are among the design elements that architecture firm FXCollaborative incorporated into an angular museum on Liberty Island in the New York Harbor.

The Statue of Liberty Museum sits just across from Lady Liberty, the famed neoclassical sculpture that France gave to the US in the 1880s. The monument sits on a 15-acre (six-hectare) island that is accessed by ferry from lower Manhattan and Jersey City.

From the very start of the project, New York's FXCollaborative – formerly known as FXFowle – wanted to create a museum that engaged its surroundings and merged with the landscape.

"The Statue of Liberty Museum was conceived as a garden pavilion that would create a joyous and welcoming experience for all visitors to the island," said design partner Nicholas Garrison in a project description.

Facing a circular plaza, the museum consists of angular volumes that are built into a waterfront site.

"The design eschews formality in favour of an asymmetrical design that embraces its dramatic setting and changes form as visitors move in, on and around it," said the firm.

Exterior walls consists of concrete and glass decorated with a dot pattern to make it more bird-friendly. Copper fascias are made of the same material used during the restoration of Lady Liberty in the 1980s. 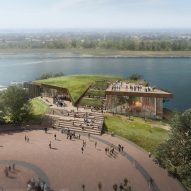 A wide, granite staircase runs up the centre of the structure and leads to an expansive roof terrace, where visitors can take in panoramic views.

"The island's landscape is lifted and merged with the architecture to create memorable public space above," Garrison said.

The roof also has a 14,000-square-foot (1,300-square-metre) meadow that is blanketed with native grasses such as fox sedge and bluestem, along with flowering plants like wild columbine. The plantings were carefully chosen to "enhance the dynamic shape of the roof and create multi-seasonal interest".

Encompassing 26,000 square feet (2,415 square metres), the museum contains a theatre and two galleries. Created by New York's ESI Design, the exhibits tell the story of the Statue of Liberty, which was designed by French sculptor Frédéric Auguste Bartholdi and was dedicated in 1886. Its metal framework was created by Gustave Eiffel.

A focal point of the museum is Lady Liberty's original torch, which was replaced in the 1980s with a replica. Made of copper and glass, the torch rises 16 feet (4.8 metres) and weighs 3,600 pounds (1,633 kilograms). It sits on view within a "sparkling glass vitrine that creates a dramatic space of inspiration and contemplation".

"This vitrine acts as an oversized display case, making it visible as beacon to visitors on the island and all over the Harbor," the architects said.

Aiming for LEED Gold certification from the US Green Building Council, the museum has many sustainable elements, including locally sourced materials, low-flow plumbing fixtures and a highly insulated building envelope.

In addition to the green roof, the project entailed the creation of several landscaped areas with a mix of indigenous, wind-tolerant plants and trees. In the rear of the museum, a large rain garden helps manage stormwater.

The new museum is part of major undertaking to enhance Liberty Island, which draws 3.5 million visitors a year. The efforts are led by The Statue of Liberty-Ellis Island Foundation, a nonprofit group that has raised money to oversee the restoration and preservation of both the Statue of Liberty and Ellis Island.