David Adjaye has revealed visuals of The Abrahamic Family House, an interfaith complex in Abu Dhabi that will contain a church, mosque and synagogue.

The three cubic temples are designed by Adjaye Associates to encourage "peaceful co-existence and acceptance" of the three Abrahamic faiths Christianity, Islam and Judaism in the UAE's capital city.

"I believe architecture should work to enshrine the kind of world we want to live in, a world of tolerance, openness, and constant advancement," explained Adjaye.

"As an architect I want to create a building that starts to dissolve the notion of hierarchical difference – it should represent universality and totality – something higher, that enhances the richness of human life," he continued.

"We hope we have set out a plan for a beautiful and thought-provoking space that celebrates the three faiths and stimulates dialogue and understanding at a critical time for the world."

Adjaye Associate's design won the competition to design a multifaith complex on Saadiyat Island – a new cultural district off the coast of the UAE's capital city.

The visuals show that The Abrahamic Family House will be positioned close to Jean Nouvel's Louvre Abu Dhabi on the tip of the islet, which will also shortly be joined by Frank Gehry's long-awaited Guggenheim Abu Dhabi.

Once complete, the church, mosque and synagogue will each be distinguished by a unique orientation and decorative facade made up of colonnades, screens and vaults evoking the details of traditional religious spaces. 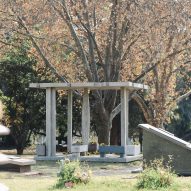 However, they will all be unified by their matching materiality, "powerful plutonic forms" and shared gardens that run between them. The overall designed aims to highlight the often overlooked similarities between the three faiths.

"I've always seen these three religions as very different – it's what we're led to believe, but then you discover these incredible connections and overlaps that sit with these distinct differences," added Adjaye.

"The evolution which then developed the narrative was to discover what was adjacent, surprisingly close even," he continued.

"The form is translated from the three faiths, we use the lens to define what is similar as opposed to what is different and we use the power of that revelation to make the form."

The fourth space in the complex is the plinth on which the temples will sit, that will not be affiliated with any specific religion.

This will house the complex's visitor centre, and will be open to the public for a mix of event and educational courses.

British-Ghanaian architect Adjaye founded his eponymous studio Adjaye Associates in 2000, with studios in both London and New York.

Other recent projects by the firm include the African American Museum in Washington DC and the pink Ruby City art centre in Texas.