Public Works has built a water-heating system powered by compost that warms a bench at the Oslo Architecture Triennale to demonstrate the potential of the system.

The system, named Power Plant(s)!, has been developed by Public Works in collaboration with Oslo School of Architecture students and Flakk/Dalziel to promote the use of waste as a viable alternative to fossil fuels for heating.

It responds to the Oslo Architecture Triennale's theme of degrowth – an economic strategy that believes in the downscaling of production and consumption – and is hoped to simultaneously raise awareness about the unsustainable amount of waste produced by humans.

"Waste is one of the fundamental outputs of 'growth'. As a society we spend a huge amount of money and energy trying to make our waste disappear and pretend it does not happen," said Tom Dobson, project lead at Public Works.

"We also spend a huge amount of energy and money extracting fossil fuel to create heat which brings a whole new set environmental issues entwined with growth," he told Dezeen.

"This project illustrates how we can create a closed loop waste-to-energy systems using nature based solutions."

The team developed Power Plant(s)! as a small-scale prototype to demonstrate how the technology can be utilised.

The installation relies on the natural reaction of composting, a the process of decomposing organic waste, which can generate heat of up to 60-70 degrees celsius.

Its cylindrical form has been developed to create a waste heap with the highest mass and the lowest surface possible to maintain heat effectively. Hay is positioned around its edges to provide additional insulation. 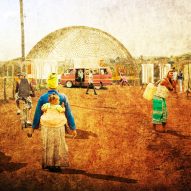 The structure works by transferring heat from the compost heap via a coil of tubing that is positioned at its centre. This leads outside and into the bench to heat it up.

At the end of its 18-month cycle, the Power Plant(s)! decomposition of the biowaste is expected to generate approximately 15-metres-cubed of nutrient-rich compost for use.

"We need to make these things visible to raise awareness as well as to confront ourselves with the reality of what we throw away so as we can begin to tackle these issues on an impactful level," added Dobson.

"One way to do this is to create performative pieces, like Power Plant(s)!, that engage people but ultimately we need legislative change and quickly. The main aim is that we create less waste in the first place and re-use whatever we do create."

Public Works is a not-for-profit design studio established in 2004 "that occupies the terrain in-between architecture, art and performance".

Power Plant(s)! is part of the studio's wider research project that is developing prototypes that transform waste into heat and biogas through anaerobic digestion technology and the production of biogas via food waste.

Following the Oslo Architecure Triennale, Public Works hopes to develop the project into domestic under floor heating in a self-build a studio it is designing in East London.

Elsewhere during the Oslo Architecture Triennale, researcher Yujia Bian is exhibiting bars of soap with the word architecture cast into them to question the idea of creating pristine works of architecture.