Architecture education in India is in crisis with a shortage of teachers, overcrowded classes and widespread cheating by students, according to architects in the country.

A huge expansion of architecture courses over the last few years has led to overstretched and under-qualified staff teaching classes of up to eighty students, Dezeen has been told.

Students regularly cut corners by paying for others to write their theses, prepare their renderings and build their models. These services are openly advertised on social media.

In addition there are persistent rumours about architecture studios that exploit desperate students by making them pay for internships, which are a mandatory part of their education.

"It is a big crisis," said Sonali Rastogi, founder partner at Morphogenesis, a firm with offices in Mumbai, Bengaluru and New Delhi. "The lack of teachers is a crisis. The large number of colleges is a crisis."

The number of Bachelor of Architecture (B.Arch) courses in India has grown rapidly in recent years. Architecture website ArchitectureLive says that 297 new architecture schools have opened in the country in the last 10 years, while the number of students graduating each year has tripled.

According to regulatory body the Council of Architecture (CoA), there are now "about 558 institutions" offering degree courses.

"The rise has been very sudden," said Rastogi, who said some schools have classes of up to 80 students.

"Where are the teachers going to come from? Because the teachers need to come from my generation, who studied at a time when there were only 20 schools. So obviously there is not sufficient teaching quantity."

"Twenty years ago Mumbai had three architecture colleges. Now there are over 16 just in Mumbai," he said. "With the huge influx of new colleges around the country , especially the smaller city ones, I am sure it is impossible to find enough experienced teachers."

But the growth in student numbers has little to do with the desirability of an architecture career, according to Rastogi.

"The problem is that we come from a nation where a professional degree is very coveted," she said. "Being an engineer or a doctor is the most desirable. But when that doesn't happen, architecture is a good fallback option. And with so many colleges, it's quite easy now to get admission into one or another."

Architecture is the first choice for only a very small percentage of students on architecture courses, Rastogi said.

"The number of students using architecture as a fallback option for education is a crisis," she added.

"Most students have no idea why they joined architecture," agreed young Delhi-based architect Urvashi Vasishtha. "A lot of them get enrolled in architectural colleges because they didn't get an admission in an engineering college."

She added: "The architectural education in India is going downhill. There are too many colleges, too many students; there is a dearth of good colleges and teachers."

Desperate to complete their studies and receive their professional qualification, students are cheating by paying others to make models, produce renderings and even write their thesis.

"Architecture theses are up for sale in the country, and there are agencies who will be doing your complete work in exchange for a certain remuneration," said young architect Shubhayan Modak, who is co-founder of architecture website Sthapatya.

Modak said these services are advertised openly on Facebook.

"There is no shame to accept or for taking any kind of outside help," continued the post, which offered help with 3D modelling, physical modelling, rendering and presentation. "Any help will be provided at affordable prices. Drop us a message and we will revert in no time."

Outsourcing student work is not illegal

Modak said the practice of paying for theses was unethical, but not illegal. He said that the CoA had no issued guidelines about the practice. The CoA did not respond to emails from Dezeen.

"What Shubhayan says is unfortunately true," said Vasishtha. "There are paid services that offer to help students complete their thesis. Most of these are run by fresh graduates who are struggling to make their ends meet in the architectural industry." 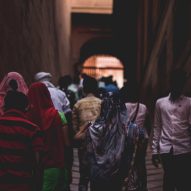 Students who do this risk expulsion if caught, Vasishtha said, adding: "A lack of a well-drafted, precise curriculum, and incompetent teachers, sometimes does lead the students to cut corners. But I don't think we can blame the colleges alone."

Rastogi said she suspected that students get others to make their models and renderings.

"I've noticed that sometimes the projects don't have much depth when you're judging them, but the quality of the model is completely [different]," she said. "Modelling as an outsourced thing to be done at the end of the teaching has become now quite acceptable".

"And the same goes for 3D renderings," she added. "They can be so slick and professional and often there are added layers; there's more than you can see in the concept diagrams. I'm beginning to suspect that might also be a professionally outsourced thing."

However on graduation students find it difficult to find well-paid work in architecture.

"There are multiple reasons as to why students decide to not practice architecture," said Vasishtha. "Strenuous working hours, peanuts for tedious labour, less opportunities for fresh graduates, exploitation of students during internships are a few factors."

Earlier this year Dezeen reported on the "exploitative" culture of architecture internships in India, with long hours for no pay being common.

Completing an internship of at least 24 weeks is a mandatory part of the five-year Bachelor of Architecture (B.Arch) degree in India.

According to Modak, some studios exploit this situation by asking students to pay for internships. However when contacted by Dezeen, all studios rumoured to be running paid-for internships either denied this was the case, or did not respond.

Students who have paid for internships will not speak up either, Modak said. "Nobody is willing to speak as it's risky for their careers".