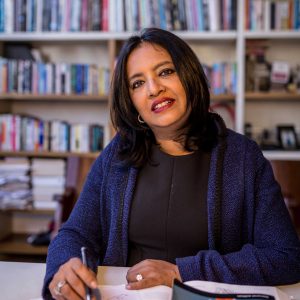 Indian architect Sonali Rastogi is a founding partner of Morphogenesis.

A graduate of the Architectural Association, Sonali Rastogi co-founded architecture and urban design studio Morphogenesis with partner Manit Rastogi in 1996. The practice, which has offices in Mumbai, Bengaluru and New Delhi, uses passive design strategies to ensure sustainability and economic longevity for its projects.

Recent projects include a school in New Delhi with perforated walls and subterranean spaces, using these traditional methods to combat the heat. Upcoming projects include the Surat Diamond Bourse, the world’s largest single office building, and the Kolkata branch of My Fortune Hotels.

Morphogenesis was one of the world's first architecture practices to report a "gender-positive pay gap", where on average female employees are paid more than their male colleagues, in an effort by Rastogi to promote equality in the workplace. There is also a 50/50 gender balance among its staff. The practice’s first monograph, co-authored with Manit Rastogi, was written about architecture in the local context of India.