Colourful, geometric textiles that Gunta Stölzl and Anni Albers created during their time at the Bauhaus school have been turned into fabric by New York company Designtex.

Designtex president Susan Lyons came across their designs and was impressed with their craft that she decided to recreate them for everyday use. She got in touch with Stölzl's daughter Monika Stadler, who lives in the Netherlands, and a family friend of the Albers in New York, Lucy Swift Weber, who is part of the Albers Foundation.

"We felt strongly that the women hadn't yet gotten as much recognition as they should have," Lyons said.

"This work was so seminal for our field, but also for design in general, that it needed more attention."

To recreate the designs into mass-made prints, Designtex referenced geometric plans that were made by the artists on graphic paper, and carefully noted the colours used.

"Both Stölzl and Albers were masters of composition," Weber, who befriended Albers late in her life, told Dezeen. "It was an abstraction that people hadn't seen before in sort of decorative products."

Stölzl-influenced works feature geometric patterns with asymmetric details and subtle use of colour. Her complex weave constructions were mapped out and heavily referenced by Designtex's team to recreate five woven textiles.

"It's so easy to just copy the forms of Bauhaus designs – the asymmetry and the bold designs – but to really capture the interesting qualities of the fabric that is difficult on the machine can never be the same," Stölzl's daughter Stadler told Dezeen. "The materials, everything has changed, the requirements have changed."

For Stolz's checkerboard pattern, which is available in a greyscale version and a coloured print with soft yellow and pink tones, Designtex worked with a family mill in Italy to produce a woven polyester that resembles linen.

"Double cloth is one of those constructions that looks simple but it's actually really complicated to figure out," Lyons added. "We have this nice roadmap of how to set up the warp."

"Even though it looks like it's simple, it was hard to find a mill who would really want to do it because it required dying a bunch of new yarn colours to specific palette and then putting in a warp with 12 colours, which most mills really don't want to do," she added.

Another new fabric references Stölzl's Circle Jacquard from 1926, with circles placed on top of horizontal blocks in a rectilinear grid.

Albers' geometric black designs from 1926 and 1927 have been transformed into digitally printed wall coverings. Other works are Albers' Jacquard I and II, from 1925 and 1926, with colour blocks of red, blue and yellow on neutral backgrounds.

"For Anni's work, it's been an interesting line to straddle because it can be easy to try to focus on getting it exactly like a replica of the original, and we've really veered away from that," Weber said. 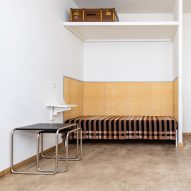 Designtex also has created designs from the women made after their time at the Bauhaus, including an embossed textile by Albers and a piece by Stölzl from 1979 with squares, rectangles and triangles.

Another by Stölzl is from an unexecuted 1926 wall hanging, Gouache, that has been reimagined as wallpaper with the original graph paper still showing. It has also been broken into sections for different combinations.

The Bauhaus Project's launch this year coincides with the school's 100th anniversary, but Lyons said the collections actually came about by accident.

"When we started this like two and a half years ago, the Bauhaus 100 was not even a thing on our minds," she said. "It was really more about the work, which was kind of funny and a little serendipity."

A number of designs from the school have been recreated to mark the anniversary of the Bauhaus's formation in 1919, such as Stölzl's dormitory blanket and a Midgard lamp that she and others used while at the institution.

Photography is courtesy of Designtex.