Montreal-based fashion designer Ying Gao has created a pair of robotic dresses that respond to their environment by rippling, expanding and contracting as if they are alive.

Whereas her previous projects have reacted to nearby people, by twisting and curling when strangers approach or lighting up when someone stares at them, the new dresses instead respond to colours in their immediate surroundings.

The contextually reactive garments use colour and light sensors, as well as tiny cameras linked to a raspberry PI computer, to gather information about their environment.

This data then activates a series of actuators and magnets interlaced with silicone to cause the fabrics to ripple and move.

"Technically and technologically speaking, this project is different from the previous ones because the clothes have a much greater autonomy," Gao told Dezeen.

"They not only interact with the people around them, but also, and especially, with their environment, so the human body is no longer at the heart of the project."

Gao was inspired to create the project by a novel by one of her favourite authors, the neurologist Oliver Sacks. It tells the story of one of Sacks' patients – a traumatised, middle-aged ex-navy sailor called Jimmie G, who reverts back to his 19-year-old self.

"Much like Jimmie G, the garments evolve between two states and display perpetual metamorphosis as they react to the chromatic spectrum," said Gao, adding that their fluctuating appearance evokes the infinite possibilities between the two opposite states.

The designer explained that another difference with previous projects is that the clothes are not made from traditional woven materials, but instead feature silicone and glass elements that were made in the studio.

Gao described the result of the moving fabrics as a "liquid and chameleon-like" effect of constantly changing forms and colours.

The shifting hues are achieved using iridescent materials, and are accentuated by the reflective glass, silicone and lightweight organza fabric.

As well as designing robotic clothing, Gao is a professor at the University of Quebec and former head of the Fashion, Jewellery and Accessories design programme at HEAD-Genève. 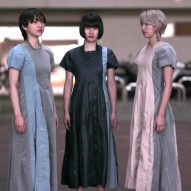 The project will be premiered at the Making Fashion Sense exhibition at the House of Electronic Arts Basel from 16 January to 8 March 2020, before being shown at the National Museum of Scotland from 26 June to 20 October 2020.