French firms Coldefy & Associés and RDAI have beaten competition from Diller Scofidio + Renfro and Studio Libeskind to build a museum and memorial dedicated to the 2016 Pulse nightclub shooting in Orlando, Florida.

Coldefy & Associés and RDAI's National Pulse Memorial & Museum will commemorate victims of the tragedy, which took place on 12 June 2016 when Omar Mateen opened fire on attendees at the nightclub killing 49 and injuring 68.

The contest organised by Dovetail Design Strategists asked contestants to come up with a permanent memorial on the site of the club at 1912 S Orange Avenue and a museum building for a plot a few blocks away. The winning design was announced yesterday from a shortlist that also included MVRDV, Heneghan Peng Architects and MASS Design Group.

Forty-nine colourful stripes – symbolic of the victims – will be placed around the former nightclub and become more densely packed closer to the structure. The outside of this colourful feature will be defined by a slender opening that will capture water running from an existing fountain.

"Water is the connecting element, from the existing fountain, it becomes a shallow reflecting pool encircling the club," said the team. "In memory of the Angels, a palette of 49 colours lines the basin and radiates towards the public space."

Coldefy & Associés, which was founded by Thomas Coldefy and Isabel Van Haute, and RDAI, established in 1972, are working with Orlando's HHCP Architects, Xavier Veilhan, dUCKS scéno, Agence TER, and Laila Farah on the project.

The team's scheme will also add greenery to a boulevard named the Orlando Health Survivors Walk, which provides a new connection to Downtown and leads onto the museum building. 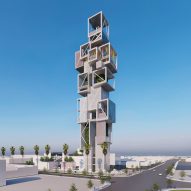 Described as "like a budding flower", the museum is designed to mark a gateway to the city's SoDo district.

It comprises a slatted white exterior that is squeezed in the middle and an undulating roof profile. Glimpses inside show a twisting staircase and plants, echoing features of the memorial, and a large circular opening that floods natural light into the space.

The project was initiated by Pulse founder Barbara Poma, who formed non-profit One Pulse following the mass-shooting to raise funds for the permanent memorial and the museum. A shortlist of six teams was announced on 31 May, and the proposals were revealed earlier this month so that the public could view them and provide feedback.

The release came months after a coalition of survivors from the shooting launched a protest against the project, which demanded the project be cancelled and that funds be given to help those suffering instead.

Diller Scofidio + Renfro and Miami firm Rene Gonzalez Architects' design proposed creating a garden around the club building, comprising cypress trees and 268 mirrored columns that represent those who were affected.

Daniel Libeskind's team meanwhile designed rainbow-coloured frames that trace through the plot of Pulse in a heart-like shape and an a towering, irregularly stacked museum. Other proposals include MVRDV playful museum, which was imagined as green mounds that spell out "love" and a scalloped white monolithic building by Irish studio Heneghan Peng.