Fashion designer Ruchika Sachdeva's label Bodice is developing a "new language of modernity" for women in India who want a minimalist alternative to traditional garments or designer formalwear.

Sachdeva set up Bodice after studying in the UK at the London College of Fashion, and undertaking internships with designers such as Vivienne Westwood and Giles Deacon.

"On returning to India, I observed that Indian women were starting to question norms and challenging conventions of society and culture," Sachdeva told Dezeen.

"I could see we needed a new language of modernity in fashion."

India has one of the world's lowest rates of women participating in the labour force, according to the World Bank, and there is persisting stigma around women seeking employment.

For women in India flouting convention and pursuing careers or setting up their own businesses, fashion options were limited.

"The kind of practical but stylish wardrobe that could allow Indian women to transition from day to evening was missing in India," said Sachdeva.

"I wanted to do something that challenged the very homogenous way that people perceived designer clothing in Delhi – that something only had value (that indeed was only 'designer') if beautifully but very heavily embroidered and reserved for evening-wear only."

"My approach has most often been called minimalist," said Sachdeva. "Still, its deeper nuances resonate with the modernism of post-independence India, with the strong Bauhaus influences the architecture of that time expressed." 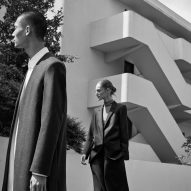 COS unveils fashion collection based on Bauhaus design principles

With 2019 marking 100 years since the Bauhaus school was founded, many designers are looking through the archives for inspiration including fashion label COS, which has just launched a Bauhaus collection.

At Bodice, everyday basics are made using the kind of handwoven textiles made by artisans and traditionally used for garments such as the sari, a draped garment worn by women.

But instead of updating traditional garments such as saris, Sachdeva translated their practical elements into a modern wardrobe.

"We look at the way the sari as an unstitched garment can drape in a variety of ways to accommodate any size or shape and look absolutely beautiful," she said.

"We've used this principle in making many of our garments adaptable to the natural changes that women's bodies undergo over months and years."

The pieces are adaptable, with double buttons that allow trousers to be sized up and down for different fits. Detachable pleats allow hemlines to be raised or lowered, and ties at the pleated sleeves mean they can be pulled in or left to flow.

"We have also incorporated sari pleats as details into pants, which function as a standard pair of trousers but have inverted pleats at the centre that echoes the grace and movement of the sari."

Sustainability is also an important part of the Bodice ethos. The non-synthetic textiles such as wool and silk are dyed using natural dyes such as wild-grown indigo plants. Fermented over days to various recipes the indigo can produce a whole palette of blue shades.

The damage that synthetic dyes from the fashion industry can do to the environment is an issue being combatted by several brands, including Australian designer Courtney Holm, who only uses natural dyes for her 99 per cent compostable clothing range.

Other designers to speak during the week include graphic designer Shiva Nallaperumal, who has created a typeface called Oli Grotesk that works across nine Indic scripts.