Canadian camouflage company Hyperstealth Biotechnology has patented the technology behind a material that bends light to make people and objects near invisible to the naked eye.

The material, called Quantum Stealth, is currently still in the prototyping stage, but was developed by the company's CEO Guy Cramer primarily for military purposes, to conceal agents and equipment such as tanks and jets in the field.

As well as making objects close to invisible to the naked eye, the material also conceals them from infrared and ultraviolet imagers.

Unlike traditional camouflage materials, which are limited to specific conditions such as forests or deserts, according to Cramer this "invisibility cloak" works in any environment or season, at any time of day.

This is made possible through something called a lenticular lens – a corrugated sheet in which each ridge is made up of a convex – or outward-curving – lens.

These are most commonly found in 3D bookmarks or collectable football cards but in this case, they are left clear rather than being printed on.

When multiple of these lenticular sheets with different lens distributions are layered in just the right way, they are able to refract light at a myriad different angles to create "dead spots".

Light is no longer able to pass through these points, hiding the subject behind them from view while the background remains unchanged.

"It bends light like a glass of water does when a spoon or straw inside it looks bent," Cramer told Dezeen. "Except I figured out how to do it with a much smaller volume and thickness of material." 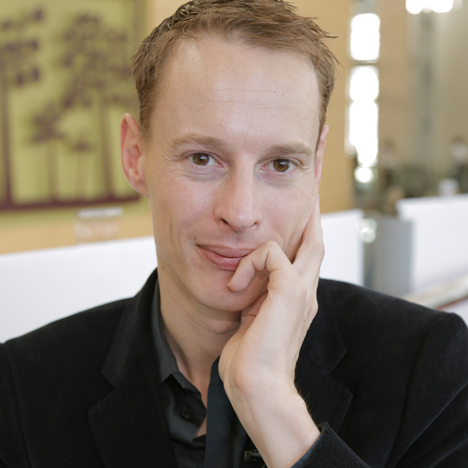 "We're working on a suit that becomes transparent when you lie"

Videos released by the company demonstrate Quantum Stealth's ability to work even when the material is the thickness of a sheet of paper, staying lightweight and inexpensive to produce while being substantial enough to also block thermal imagers.

There remain, however, some restrictions to the effectiveness of the material, as it requires the subject or object to stand a certain distance away in order to be concealed, and the effect might be more or less convincing when viewed from different angles.

The patent includes 13 different versions of the material, which are tweaked to allow larger items to be concealed, patterned for use when hunting or capable of distorting an object in case it cannot be entirely hidden.

"We are in the process of working with manufacturers to tool up for these unique lenses," Cramer explained. "The manufactured versions should be very clear and quite detailed compared to the crude prototypes I currently have. I anticipate that the material will be ready for most applications within the next 12 months."

This includes being used to fashion items such as riot shields, camouflage nets, parachutes or pop-up tents.

"It won't be clothing yet due to the stand-off distance required. I would give that about an 80 per cent probability at some point in the future," he continued.

Outside of military applications, Cramer also claims that he was able to use the material to triple the energy output of solar panels due to its large reflective surface area.

Previous iterations of "invisibility cloaks" that have been developed by researchers and scientists are closer to devices rather than materials.

They include the Rochester Cloak – a system of four lenses, set up at a distance from each other, which is limited to disappearing small objects – as well as a cloaking device made of copper rings by scientists at Duke University capable of bending microwave light around an object.

Daan Roosegaarde told Dezeen a few years ago about a project that flips this idea of its head. Instead of a material that conceals the person behind it, the Dutch designer was working on a suit that turns transparent when the wearer lies – something he suggested could be used to "expose dishonest bankers".