Design studio Made Thought has imagined the shop of the future, with an experimental pop-up in London that has a lot in common with a digital experience.

Designed in collaboration with Studioshaw, the Made Thought store brings together an assortment of elements you typically wouldn't find in a shop, from editorial articles to immersive installations.

It gives the studio – which specialises in branding – a platform to show off its work, but also to start up a wider conversation about how creative thinking can be used to improve the world of retail and products.

"People don't want just rails of stuff anymore," explained Paul Austin, who founded Made Thought with Ben Parker. "The question is, how do we engage that?"

He told Dezeen: "We thought, why don't we have a shop but not actually run it as a shop, but rather as an immersive space that retailers might take something from?"

"It resonated," said Austin. "It's got everything you'd expect to find in a website."

Located in London's Seven Dials, the Made Thought store is open for 12 weeks. The space is divided into three sections which change regularly.

The most dynamic of these is the basement – a space that is transformed weekly with different installations, in partnership with brands including Fred Perry and Naim Audio.

For farm-to-table hotel Heckfield and skincare brand Wildsmith, it was transformed into a landscape of water reeds, as the setting for talks about biodynamic farming practices.

For music equipment and software brand Ableton, a wooden cube was installed in the space, containing a replica of the bedroom of music producer Farao. The cube could be opened up to host live music performances.

"Ableton were thrilled because they just don't get the opportunity to do this," said Austin. "Their universe doesn't allow it."

What is particularly effective, said the designer, is that the installations don't feel overtly branded.

"It didn't want to feel like it was 'and sponsored by Ableton'," he explained. "I think that's been one of its biggest strengths. People see it much more on a kind of creative level than a commercial level."

On the left-hand side of the ground floor space is the shop area. Here, Made Thought is presenting a selection of its projects, which visitors can engage with.

Objects including Tom Dixon accessories and GF Smith paper products are organised on a colourful plinth made out of recycled materials. Products for sale are also displayed here, including T-shirts, candles and notebooks.

On the opposite side of the space is an exhibition area that includes the shopfront.

Made Thought uses it to showcase the latest edition of its journal, To Think, a magazine filled with articles by creative thought leaders including Katharine Hamnett and Bella Lack.

"As designers, we have a responsibility to approach what we do differently," said Austin. "I think that that's been the overarching message here."

The designer revealed that the project, although expensive, only cost a bit more than Made Thought spent hiring a PR firm the previous year. He suggests more creative studios should follow the example. 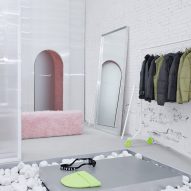 "If we're going to spend any money on reputation, this is how I see it being done," he said. "I'd much rather do something interesting and let people hear about it, and use our social media and our platform to actually have an opinion."

The store is open at 27 Shorts Gardens until 30 November. The studio is also in discussion to repeat the format in other cities, including Miami and Seoul.