Lina Bo Bardi's famous glass easels and a 1960s expo pavilion by Aldo van Eyck have both been reconstructed in Lisbon, for the exhibition Art on Display at the Calouste Gulbenkian Museum.

The landmark show, which celebrates the 50th anniversary of the Portuguese art museum, recreates some of the most groundbreaking exhibition displays created by architects in the 1940s, '50s and '60s.

Curators Penelope Curtis and Dirk van den Heuvel want to show that exhibition design, particularly by architects, was more radical in the midcentury than it is today.

By placing artworks in non-traditional contexts – examples include paintings without frames and sculptures on the floor – these architects were trying to democratise art for a postwar audience.

"The nexus of art and architecture was very important around the second world war and in the postwar decades, in terms of rethinking how art could help develop a more egalitarian society," explained Van den Heuvel during a tour of the exhibition.

The curators worked with architect Rita Albergaria to reconstruct fragments of the original exhibition displays. In many cases they only had photographs to work from, so had to judge a lot of the dimensions by eye.

"The whole exhibition was, you might say, a calculated risk to see how well we could reconstruct without pretending it was completely faithful," added Curtis. "We found ourselves obsessively poring over these photographs to try and get it right."

The artworks used for the displays are all from the Gulbenkian's collection, but were selected to reference the original pieces.

"In almost every case we had something that was really quite appropriate," Curtis said. "So we feel that we did a good job of representing the art without trying to completely duplicate the original."

The largest reconstruction in the exhibition is of the pavilion that Dutch architect Aldo van Eyck created for the Sonsbeek exhibition in Arnhem in 1966.

A large section of the pavilion stands at the Gulbenkian Museum entrance, while a smaller piece can be found in the gallery.

Built from rough concrete blocks, the pavilion comprised a series of parallel walls with curved niches. The idea was that visitors would feel like they were having chance encounters with the sculptures displayed inside.

"Van Eyck thought of the pavilion as being inhabited by these sculptures," said Van den Heuvel. "You would go inside, become a physical inhabitant yourself and bump into these other inhabitants."

There are also displays that Van Eyck created for experimental collective Cobra, which saw artworks shown below eye-level.

Small paintings were placed on low-level plinths at the Stedelijk Museum, while sculptures were arranged in beds of coal at the Palais des Beaux-Arts.

Van den Heuvel notes that these displays were even more provocative than the ones that Rem Koolhaas recently created at the Stedelijk, which have proved highly controversial.

"These artists didn't want to go back to the prewar situation where art was a sanctified space for certain bourgeois elites," he said. "They wanted to bring out irrationalities and emotions."

A collection of designs at the show's entrance connects the exhibition with the history of the museum itself.

Franco Albini, believed to have been pivotal in the design of the Gulbenkian's exhibition spaces, and his partner Franca Helg, created several innovative stands for paintings at the Palazzo Bianco and Palazzo Rosso in Genoa, including slender poles and lever arms.

At the other end of the gallery, the exhibition contains 20 recreations of the glass easels that Italian-born, Brazilian architect Lina Bo Bardi first presented at the Museum de Arte de São Paulo (MASP) in 1968. 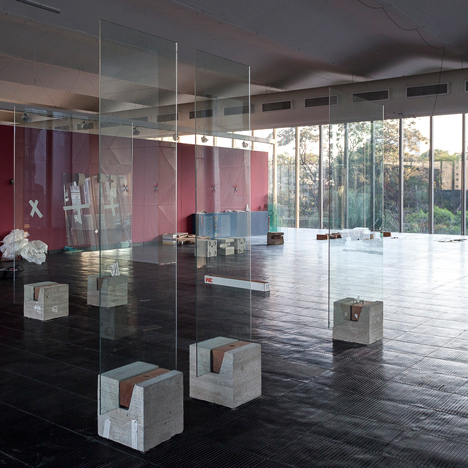 The paintings are hung on transparent glass screens, supported by concrete cubes at the base. Like with the designs of Albini and Helg, who Bo Bardi knew, art occupies the middle of a room, rather than being restricted it to the walls. "Bo Bardi learned a lot from Albini," noted Curtis.

The curators chose a lesser known exhibition design by the Smithsons – a zigzagging stand created for the Tate Gallery in London. It featured an industrial-style lighting system, with lights so bright that it was impossible to see anything else but the art.

"The Smithsons told the director and all the staff that no one was allowed to bring in visitors with the lights off, not even outside closing hours," revealed Van den Heuvel.

There is also one original display piece in the show. Easels created by Italian architect Carlo Scarpa are presented against a backdrop of framed screens.

Art on Display is on show at the Calouste Gulbenkian Museum until 2 March 2020. After that it will move to the Het Nieuwe Instituut in Rotterdam.