Cullinan died in his sleep on Monday 11 November. The architect, who was known as Ted, was awarded the 2008 RIBA Royal Gold Medal for Architecture in recognition of his "inspirational practice and teaching".

Alongside creating buildings that included the Fountains Abbey Visitor Centre and the Weald and Downland Gridshell, which was shortlisted for the Stirling Prize in 2002, Cullinan taught at The Bartlett, Sheffield University, MIT and the University of Edinburgh.

"The news that Ted Cullinan passed away in his sleep on Monday is hard for us to take in," said a statement from the practice.

"The inspirational founder of our practice was a true pathfinder for all architects. Ted was designing for climate change 60 years ago with a holistic vision for the practice of architecture that he described as a social act," it continued.

"His legacy is in the buildings and places he transformed, in his model of architectural practice, but perhaps most powerfully in the thousands of people he taught and inspired throughout his long life. We share our deepest sympathies with his family and all his many friends."

In 1965 he established the cooperative studio Edward Cullinan Architects, which became Cullinan Studio in 2012.

He designed numerous residential projects, including his own house in Camden, which is described by the studio as "an early example of a passive-solar house".

The studio also built many visitors centres including the Fountains Abbey Visitor Centre, and university buildings like the Docklands Campus for the University of East London. 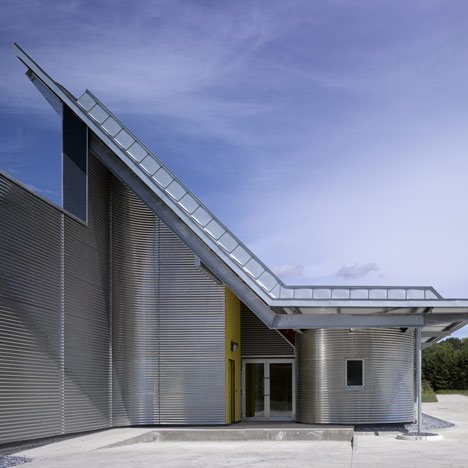 Throughout his career Cullinan was known for designs that consider their impact on their environment, something that was recognised when he was awarded the RIBA Gold Medal in 2008.

"Over four decades of inspirational practice and teaching, Ted Cullinan has shown us how a keen awareness of the natural environment and a deep engagement with those who use and experience buildings, can generate compelling and poetic architecture," said RIBA President Sunand Prasad at the time.

"He is also known for being one of the great teachers of our times, and hundreds of students continue to be inspired by his enthusiasm, energy and deep insights into architecture."

Photography is courtesy of Cullinan Studio. Portrait is by Simon Warren.