ArkDes has mounted an exhibition celebrating the role of concrete panels in contemporary architecture, with an exhibition design by Note Design Studio that evokes the dynamism of a construction site.

The exhibition titled Flying Panels – How Concrete Panels Changed the World, looks at the history of prefabricated concrete architecture and the impact it has had on modern urban environments.

The show is based on research conducted by Chilean curators Pedro Ignacio Alonso and Hugo Palmarola, who spent years examining the evolution of concrete panel systems and their varied uses around the world.

It is being presented at a time when some architects are calling for the industry to abandon concrete construction altogether, as the material is considered a major contributor to climate change.

According to ArkDes, "Flying Panels tells of the time when a concrete panel soaring across the sky symbolised the future and embodied dreams of a better world".

The organisers suggested that, although the concrete panel is now "a building component often derided as the ugly face of our cities", it was viewed positively in the post-war period as a potential solution to the existing housing shortage.

The show presents imagery and artefacts that give a sense of the optimism surrounding the early examples of prefabricated concrete construction, when developers and local municipalities presented visions for whole new neighbourhoods to be built using this emerging method.

Posters, films, toys and cartoons from the 1950s and 1960s demonstrate how the flying panels were depicted and perceived in popular culture at the time. 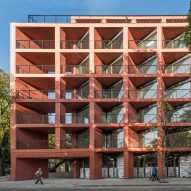 Since then, prefabricated panels have been central to the global trend for urbanisation, with concrete making it easier to quickly construct affordable housing that can adapt to local needs.

Sixty examples of modular building-systems from around the world feature in the exhibition, which is organised around a suspended 1:5-scale model of a typical concrete panel system.

Stockholm-based Note Design Studio was responsible for the exhibition design, which aims to encapsulate the familiar feel of a construction site and, therefore, appeal to both architects and a more general audience.

"We want to capture that utopian momentum where everything seems possible and the air is filled with excitement and anticipation for the future," said Daniel Heckscher, a partner and interior architect at the studio.

"For us, that moment in time is represented by the construction site," he continued. "It's a place where you look up, change your normal perspective, and let yourself dream for a while."

Alongside the scale models, the scenography includes plinths resembling building materials stacked on the ground, and wall panels that enclose the space like fencing surrounding a construction site.

Recent concrete innovations include a proposal for rapidly building refugee shelters using a concrete textile combined with water, and a robotic-fabrication system that could be used to erect more sustainable high-rise buildings.

Flying Panels – How Concrete Panels Change the World is on show at ArkDes, Stockholm until 1 March 2020.