Design gallery The Future Perfect is exhibiting weird and wonderful ceramic homeware and accessories across its locations in Los Angeles, New York and San Francisco.

The Future Perfect teamed up with London design editor Tom Morris to create the exhibit called Mess, which opened 7 November at the gallery's three locations in America.

Following on from Morris' publication New Wave Clay, which was dedicated to contemporary ceramic work, the showcase is intended to highlight the creativity of today's ceramicists.

"Mess refers to the frenzied pleasure that can be had experimenting with an unruly, elemental and alchemical material such as clay," said Morris.  "It refers to the radical, feckless approach many contemporary ceramicists are showing – quite happy to blur boundaries and break the rules on what people expect of ceramics."

"They make a mess with traditional techniques as well as formal style," he added. "These elements have all combined to create a really exciting time for the discipline, which we hope to study in this show.​"

Morris worked with The Future Perfect's gallery director Laura Young to select 32 international artists to create pieces for the three-part showcase. "We asked each artist to push the material and explore fresh ideas both physically and conceptually," Young said.

"Works from Harvey Bouterse, Virginia Leonard and Roger Coll exhibit a level of physical turmoil on the surface," Young said.

Young also highlighted a number of Los Angeles artists in the showcase such as Bari Ziperstein, who created glossy furniture pieces that include side tables with drip-like finishes and geometric shapes, and large plant pots. "Bari Ziperstein really turned​ her process on its side, producing large-scale works that are both functional and completely sculptural," Young added. 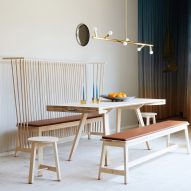 Maxine Magnus, meanwhile, created objects modeled on flowers that bare fingerprint marks and miniature stones embedded into the surface. "Magnus is a truly badass woman who has built an entirely new body of work for this exhibition somehow just weeks after giving birth to her first child," she continued.

Other standout designs are a set of upturned vases that Swedish fashion illustrator Liselotte Watkins has decorated in colourful geometric patterns. Katie Kimmel created a piece based on an egg, with a rounded white body, and two yolk-coloured feet.

Founded by David Alhadeff in 2003, The Future Perfect is presenting Mess concurrently from 7 November 2019 to 15 January 2020 at three of its outposts.

These include Casa Perfect LA, which is located in a Beverly Hills villa once owned by Elvis Presley, 55 Great Jones Street in New York and 3085 Sacramento Street in San Francisco.