An exhibition at London's V&A museum looks at the car as "a designed object", charting its 130 year-long impact on global culture from fashion and furniture to mass production and the built environment.

From the first-ever production car, the 1888 Benz Patent Motorwagen 3, to the 2017 Pop.Up Next flying car designed by Airbus and Italdesign, the V&A has brought together a vast collection of vehicles never before displayed in the UK.

Each of the items in these three zones represent different ways that the car has changed how we live, including how our relationship to speed has inspired visual culture, and how changing landscapes have impacted consumer habits.

As V&A curator Brendan Cormier told Dezeen, he and fellow curators Lizzie Bisley and Esme Hawes wanted to create a show that didn't look at the design of the car, but rather focused on the car as a designed object and "an agent of change" that has shaped the world.

"The V&A's mission is to champion the power of design to change the world, and no other design object has impacted the world more than the automobile," said Cormier.

"This exhibition is about the power of design to effect change, and the unintended consequences that have contributed to our current environmental situation," he added.

The opening section, Going Fast, explores how designers used the car to envision a future of "liberated movement" through sci-fi-inspired technological advances.

Starting with the first-ever production car created in 1888 by Karl Benz, which had a maximum velocity of 10 miles per hour, Going Fast illustrates how basic automotive technology quickly developed to place speed at the forefront of its design.

Examples include the Firebird 1 concept car – also known as "the car that wanted to fly" – which was produced in 1953 by American automaker General Motors, having taken inspiration from new jet fighter aircrafts from that time.

This fascination with speed went on to inspire a worldwide racing culture and led to developments like aerodynamics, which is exhibited in the 1937 Tatra 77 car – the first car designed according to the principles of streamlining.

This design by Austrian engineer Paul Jaray went on to influence numerous other areas of design, from cloche hats to kitchen utensils.

The retrospective exhibition also explores the downside to developments in speed, and how designers have responded to this.

"I can't think of another design object where we'd openly accept a million casualties a year because of its creation," said Cormier. 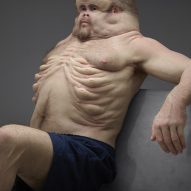 A lifelike sculpture called Graham is featured in this part of the exhibition, which is a visualisation of what a human might look like if we evolved to naturally withstand a car collision.

Created as part of a campaign by the Australian Transport Accident Commission, Graham has a flat face to absorb impact, an enlarged skull with extra fluid to protect his brain, and numerous nipples in his chest that act as an "airbag".

For Cormier, the effect of the car on today's world is most explicitly shown in the second Making More section, which focuses on Henry Ford's invention of the moving assembly line in 1913.

"Henry Ford unlocked the magic recipe of how to mass produce what was a really complicated car when he made the moving assembly line," said the curator.

"The idea of factory work, coordinated movement and industrial production really quickly became a public spectacle around 1914, and this started to influence all sorts of creative endeavours, from furniture to fashion," he added.

The final section, Shaping Space, explores how the car has changed the world's landscape and urban infrastructure.

This includes the competition between electric and petrol cars in the 1890s, and how the latter's victory led to a global network of roads and an oil economy. 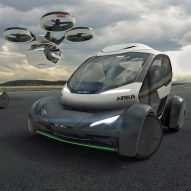 "At this time, cars weren't seen as a must-have object, so companies like Citroën and Michelin had to come up with unique selling points," Cormier explained.

"One of them was this idea that a car could transform you into a 'personal explorer' – that you could cross inhospitable landscapes with this new contraption," he added.

Citroën's off-road Auto-Chenille is an example of this, when the "half tank half car" was sent on a publicised trek across Africa and Asia in the early 20th century.

In opposite corners of the exhibition space are two screens, one showing the number of vehicles built this year and the other tracking the number of oil barrels left in the world – the former increases by the second as the latter decreases.

"When you're dealing with a subject of such global impact, how do you visualise the scale? These numbers are a way of showing the immensity and scale of the subject, but also the immense contradictions that are buried within that subject," said Cormier.

"You can interpret it how you like, but one obvious interpretation is the anti-consumerist frame of thought of 'do we really need so many of these?'"

"The oil numbers really paint a sense of urgency of coming up with solutions," he added. "In so many instances in the show we talk about how history repeats itself – this is not the first time we've talked about the problems of an oil-based economy."

Cars: Accelerating the Modern World is on show from 23 November 2019 until 19 April 2020 at the V&A Museum in London's South Kensington.