Hunters Point Library in New York's Long Island City by Steven Holl Architects has been hit with a class action lawsuit for its "total disregard" of people with mobility disabilities.

Non-profit organisation Disability Rights Advocates (DRA) filed the lawsuit today, claiming the library "was designed and built with a total disregard for adults and children with mobility disabilities".

The building, which opened at Hunters Point, Queens in September, has been the subject of ongoing complaints, with disabled users protesting that three areas of shelving were accessible only via stairs. Books from these sections have since been moved.

Earlier this month, Steven Holl Architects dismissed the issues as "wrinkles", saying they are "normal" for a project of this size.

The 21-page Hunters Point complaint says the library is "in flagrant contempt" of the act.

"Inaccessible features pervade the new Hunters Point Library, and exclude people with mobility disabilities from a variety of its offerings," the document continues.

Steven Holl Architects' design was criticised when the $41.5 million (£32.2 million) library first opened because it included three terraced levels of books that were only accessible by staircase, meaning they were off limits to visitors that are unable to walk.

Numerous areas off-limits to those with mobility disabilities

Initiated by plaintiffs Tanya Jackson and Center for Independence of the Disabled – New York (CIDNY), the lawsuit lists "numerous" other barriers to those who don't have full mobility. These include children's areas with multi-level lounges and meeting spaces, and the top level of the roof terrace.

Other complaints are that "stunning panoramic views" through the large windows are only visible from the staircase; there is one elevator that creates large queues, and doesn't stop at every level; and the path from the elevator to the main areas is blocked by stroller parking. 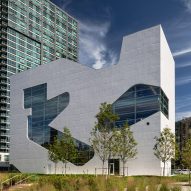 "The ADA is not a new requirement, and it is not hard to understand," said DRA staff attorney Andrea Kozak-Oxnard. "It is baffling that this $41.5 million building is missing these fundamental elements."

"It's as though the library didn't care about these requirements, or worse didn't even consider the needs of these members of the community," Kozak-Oxnard added.

"People with disabilities should be able to browse, relax, and enjoy the library just like everyone else."

DRA, a non-profit that provides free legal services for those with disabilities, intends the lawsuit to force the library to readdress the building's layout.

"Hunters Point Library was meant to be a model, a state-of-the-art institution designed to serve the needs of the community," Michelle Caiola, managing director of litigation at DRA Michelle Caiola added.

"The Library's total disregard for adults and children with disabilities must be addressed."