Architect Brandon Dean, the founder of Dean Works, designed Brooklyn Loft for a young couple from Portland, Oregon that moved to the New York City, bringing with them two large dogs and a house full of belongings.

The studio inserted a large Baltic birch plywood volume into the apartment in the Clinton Hill neighbourhood to solve a number of problems, including creating more storage space and sectioning off a private sleeping area.

"They found a nice, sunny studio-loft in Brooklyn that felt right but lacked storage and a separate bedroom," Dean Works said.

"These requirements helped establish the design priorities early on; add desperately needed storage, create a space for sleeping, and preserve the loft 'feel'."

The wooden structure forms cabinets and countertops in a kitchen, and also acts as a room divider to a bedroom concealed behind double glass doors. The unit provides closets in the bedroom as well. 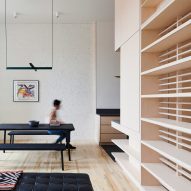 "The big design idea was to insert a storage wall that spatially separated but tectonically blended the new bedroom and kitchen," the studio added.

Brooklyn Loft is arranged to comprise the living area on one side, the bedroom on the opposite, and the kitchen in the middle.

Dean Works chose the humble wooden material to tie in with the couple's Baltic birch plywood table that they designed and built in Oregon. It is now seen in the open-plan dining and living room, just off the kitchen.

Plywood's tactility and simplicity informs the rest of the decor in the 920-square-foot (85-square-metre) apartment, which features white walls and exposed ductwork and pipes.

Existing wooden floors closely match the colouring of the veneered surfaces throughout, while grey and white are used prominently.

Plywood fronts the kitchen appliances, including the refrigerator, with only the oven exposed.

The kitchen island is topped with dark stone for contrast and anchors the heart of the apartment. White marble is used on the kitchen backsplash, sink counter and shelves.

Pops of red and blue are added to enliven the pared-down aesthetic.

Shane Neufeld of studio Light and Air Architecture also reorganised another Brooklyn apartment around a Birch plywood system, while practice New Affiliates redesigned another apartment in the borough to include plywood interiors.

Photography is by Daniel Salemi.