Students participating in the DigitalFUTURES International 2019 summer workshop at Tongji University worked with local research studio Fab-Union to design the arch bridge, which can hold more than 20 people.

The Robot Fabricated Hybrid Bridge is an exploration of two relatively recent construction methods: large-scale metal 3D printing, such as that used for MX3D's world-first bridge, and filament winding, as seen in the University of Stuttgart's beetle-wing-inspired Elytra pavilion.

Both techniques save money, material and energy compared to traditional building methods such as subtractive manufacturing or cast pouring, and the students wanted to see how they could work in synergy.

Their hybrid method involves no formwork or moulds, and they believe it offers a great degree of design freedom.

They used 3D printing to construct the skeletal steel base of the bridge, and winding of carbon and glass fibres to produce the web-like steps and handrails.

They used topology optimisation software to strip away all unnecessary material from the design, which ended up requiring 263 kilograms of steel for the 11.4-metre-long bridge. At its thinnest points, the steel frame is 20 centimetres thick.

The construction phase took 20 days and a total of four robots – two per fabrication method.

The structure was preassembled off-site before being installed over a water feature at Tongji University's College of Architecture and Urban Planning, where it stayed from July to October 2019. 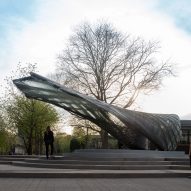 Drones and robots weave carbon-fibre pavilion based on moth webs

"This project proves intelligent construction has a great potential for material and energy saving in the architecture field," he added.

The group deliberatively removed all decorative elements from the design to put the focus entirely on its materiality.

"This project presents a clean, accurate, strong structure," they said. "The light from the sunshine travels through the glass fibre, creates a soft soothing glow."

Their Multi-material Robotic Fabrication group was one of 12 groups in the DigitalFUTURES 2019 series. Others focused on topics including augmented timber assembly, decision-making in smart cities, AI in urban design, generative design and holotectonics, or holographically aided construction.

Photography is by Fangfang Tian unless stated otherwise.