Studio Sain worked with one of Austria's last remaining woodturners to develop this collection of hand-turned wooden products that feature moving parts or modular components.

Designers Martijn Rigters and Namuun Zimmermann, who began working together as Studio Sain in 2018, developed the Bulbous project as part of Vienna Design Week's Passionswege 2019 programme, which pairs design studios with local craftsmen.

Studio Sain was invited to collaborate with Viennese woodturner Hermann Viehauser on a collection of products that highlight the contemporary potential of this traditional craft.

The project allowed the designers to learn about and celebrate the hand-turning process, which they claimed is steadily being replaced by faster, automated manufacturing methods.

"With Hermann Viehauser being one of the last woodturners in Vienna, it is clear this craft is slowly disappearing – probably because of the typical cliche of being time consuming and costly," Rigters and Zimmermann told Dezeen.

"We wanted to embrace the incredible high level of precision of the handmade pieces, and to end this collaboration with a collection of unconventional pieces."

The Bulbous collection comprises a movable light, mirror and modular shelving system made from linden wood that was chosen for its softness and light colour.

Rather than being purely decorative, the products highlight the functional potential of hand-turned forms.

"We decided to approach woodturning as a form of joinery, with movable, seamlessly fitting components," the designers added. "We were hoping to find an interesting approach to this ancient craft by creating these more mechanical, functional objects."

The smooth, rounded forms of the objects were inspired by the curvaceous features of a paleolithic sculpture known as the Venus of Willendorf, which was discovered in 1908 near the Lower Austrian town of Krems.

The forms also contribute to each product's specific function, with the mirror and desk light featuring ball joints based on joints found in the human body.

The angle of the wall-mounted mirror can be changed by rotating the top section over its spherical base, while the position of the desk lamp's bubble-like glass diffuser can be adjusted thanks to a ball joint that mimics the human knee. 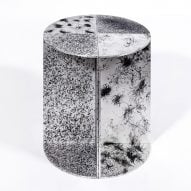 The hanging light's familiar lathe-turned profile creates ridges that hold the cord used to suspend it from the ceiling in place. The form can be repeated to create longer lights if required.

The wall-mounted shelves are made from two turned spheres that are quartered to produce four sets of shelves. These can be used individually or combined modularly to form longer compositions.

The products were presented at Viehauser's workshop during the Passionswege event, which took place from 27 September  to 5 October 2019.

The choice of location meant that visitors were able to witness the tools and processes used to make the products, as well as the project's final outcomes.

Studio Sain has continued to develop the objects so they can be produced in small numbers. They can also be adapted for special commissions.

Rigters and Zimmermann met while studying at the Royal College of Art and established Studio Sain after moving from London to Vienna.

Their multidisciplinary practice combines conceptual thinking with material research and experimental processes in order to create outcomes that are original in their aesthetics and functionality.

Rigters' previous projects include a rippled sofa made by forcing a block of foam between hot wires, and a group of aluminium stools patterned with human hair, which he developed in collaboration with Fabio Henry.