German artists Elmgreen and Dragset have installed a sculpture that looks like an U-shaped swimming pool outside the Miami Beach Convention Center.

Unveiled as part of this year's Miami design week events, the 20-foot-high (six-metre-high) Bent Pool comprises a matte-white lacquered rim that resembles a pool's edge and a turquoise interior meant to convey the basin.

With Miami and Miami Beach among a number of coastal cities threatened by rising sea levels caused by the climate crisis and already prone to flooding, Elmgreen and Dragset created the surreal sculpture to raise awareness about the region's changing landscape in the face of the climate crisis.

"Miami Beach is an area that has seen a rise in extreme weather and flooding; its landscape is in flux," Elmgreen and Dragset said.

"Bent Pool encourages us to think about how we normally interact with our surroundings: how accessible or inaccessible they appear."

Other elements that aid a realistic appearance, despite the warped shape, are circular lights that glow at night, a stainless steel ladder and a turquoise diving board. 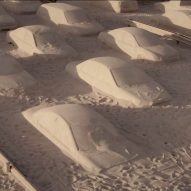 "Identified by details such as its ladder, its diving board and pool lamps, the abstracted object can easily be recognised as a swimming pool even though its bowed shape prevents it from carrying water," the studio added.

Curved pieces of aluminium were used to create the unusual structure, with the two ends resting atop a concrete plinth. "Bent Pool is shaped like an inverted "U" and stands upright on a two-tier plinth," the studio said. "The pool seems to have somehow been lifted out of the ground and stretched into a curved form."

The archway at the sculpture's centre also forms a narrow opening designed to accommodate only one individual at a time.

Simple geometric forms, prefabricated objects and vibrant imagery taken from Pop Art and conceptualism informed the design, however, the studio constructed all of the sculpture's individual pieces.

"The work draws on the minimalist reductive tradition and use of geometric forms, as much as it does on Pop Art and conceptualism's use of ready-made objects and imagery," the designers added. "Yet, on closer inspection, one will discover that this is not an altered ready-made, but a carefully crafted object."

Bent Pool is the final piece in a series of permanent site-specific works of public art commissioned by Miami's Art in Public Places Program to be installed on the grounds of the city's convention centre. Collectively the six permanent installations comprise the largest public art project placed on a single site in the United States.

The permanent installation was unveiled to coincide with Miami art week, which comprises Art Basel and Design Miami events. As part of the activities, artist Leandro Erlich created a sand-covered traffic jam on Miami beach to similarly raise awareness about climate change.

Elmgreen and Dragset was establised by Michael Elmgreen and Ingar Dragset in 1995. Its offices are located in Berlin. The duo has previously installed commissioned art in notable locations around the world, including Powerless Structures Fig. 101 located in London's Trafalgar Square and Van Gogh's Ear in New York's Rockefeller Plaza.