Swedish studio Form Us With Love has designed a modular bench seating system for +Halle, which aims to create privacy in public without using walls or dividers.

The Levels benches come in three heights and three lengths that can be mix-and-matched to create seating for a wide range of indoor shared spaces.

With sitters positioned at varying heights and facing different directions, Form Us With Love (FUWL) said they wanted Levels "to create subtle divisions between people".

"We accept the fact that the ways in which people dwell within a space can be particularly divergent," said FUWL CEO Jonas Petterson. "A lot of the choices for taking respite are informed by the anxiety we all feel in a shared common space."

"The question then is, how might we create a concept that lets people relax within a dynamic convivial space?"

FUWL creative director John Löfgren said the seating would allow people "to take a mental minute" without closing off the space.

"The intention is not to prescribe the function of dwelling, but to suggest it through materiality, shaping, and compositions," he said. 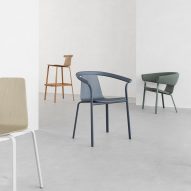 The upholstered bench design is based on simple shapes derived from architecture. FUWL describe it as "two pillars supporting a beam".

Customers will be able to order the furniture as a single item – for instance spaces like the front of a shop – or in large configurations for offices or other communal spaces.

Furniture made by Danish design brand +Halle can be found at companies including Google, Bang & Olufsen, Heathrow Airport and Microsoft.

Levels is a product of the programme at +Halle's called Annual Briefing, which sees the brand bring together several design studios to answer the same brief and give each other feedback during the process.

The theme of this first brief was Dwelling and asked the designers to address the "deficit of moments to oneself in public spaces, and the human experience of seeking those moments out in the most public of places".

Along with FUWL, MSDS and Nick Ross are the other two studios who worked to the same brief and joined in the collaborative approach to ideation. Their two collections will be released in the coming year.

FUWL was founded in 2005. It has designed for +Halle previously, producing the slender-legged, club-style Nest seating in 2016.

Other projects from the Stockholm-based studio include BAUX's acoustic panels and the Odger sustainable chair for IKEA.