Artist Anne Hardy has decorated the facade of London's Tate Britain gallery to make it look like a temple marooned by rising sea-levels, in a bid to raise awareness about the impact of climate change.

The artwork, titled The Depth of Darkness, the Return of the Light, anticipates the upcoming winter solstice and is informed by the rhythms of the earth and the tides of the adjacent River Thames.

"The title is inspired by pagan descriptions of the winter solstice – the darkest moment of the year," said Tate Britain in a statement announcing the commission.

"It refers to seasonal cycles and longer-term ecological patterns, as well as alluding to contemporary social and political issues and the hope for positive change."

Objects representing the detritus found littering the rivers and oceans cascade down the steps from the shuttered central door, seemingly trapped in a monochrome slick of flowing liquid.

Hardy also created a 21-minute quadrophonic sound work as part of the commission, using field recordings she gathered while kayaking along the river. 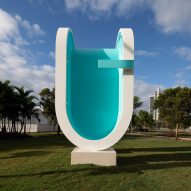 Six installations that call attention to the climate-change crisis

The installation is typical of the large-scale sculptural works Hardy likes to create, which combine physical materials with light and sound to immerse viewers in a multi-sensory environment.

It draws on the artist's research into the history of the riverbank site, which was once marshland and could become submerged by rising sea-levels in the coming century. This urgent environmental message informed the artwork's dystopian aesthetic.

"The light and sound elements of the work are site specific and have been choreographed in situ to give the impression that the building has become possessed," the gallery added.

"Manifesting these environmental changes through the material and aural changes to the site, the commission appears to transport visitors through time and place to a parallel prehistoric world or post-apocalyptic future."

Now in its third year, the Winter Commission invites an artist to create a response to the site and the building that remains in situ throughout the Christmas season. Hardy's installation will be on show until 26 January 2020.

Last year's installation by Monster Chetwynd featured two giant slugs that appeared to have left a slimy trail across the gallery's facade.

For the inaugural commission in 2017, Alan Kane used off-the-shelf Christmas decorations to evoke the way people decorate their homes at this time of year.

In 2016, Tate Britain marked the festive season by hanging a Christmas tree upside down from its ceiling. Its recent exhibitions have included a retrospective of Rachael Whiteread's cast sculptures and a large-scale lighting installation by Cerith Wyn Evans.

Photography is by Oliver Cowling.